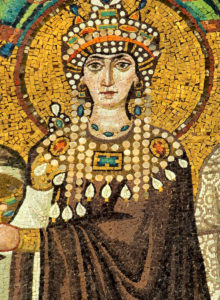 O God, who called your servant Theodora to an earthly throne that she might advance your heavenly kingdom and who gave her the wisdom to establish unity where there had been division; Create in your church such godly union and concord that we might proclaim the Gospel of the Prince of Peace, not only in correct theology but in right actions. All this we ask through the same Jesus Christ our Lord, who lives and reigns with you and the Holy Spirit, one God, for ever and ever. Amen.

Theodora (c. 815 – after 867) was a Byzantine Empress as the spouse of the Byzantine emperor Theophilos, and regent of her son, Michael III, from Theophilos' death in 842 to 855. She is best known for her restoration of the veneration of icons, which ended the Byzantine Iconoclasm.

Originally from Paphlagonia (on the Black Sea coast of what is now Turkey), Theodora was of Armenian aristocratic descent.

In 829, Theophilos succeeded to the throne. He was sixteen-years-old and unmarried. The following year, in May, 830, Theodora was chosen to become empress, probably by her new mother-in-law. The marriage took place on 5 June 830, in Hagia Sophia.

Despite the fact that Theophilus was an iconoclast, Theodora held fast to the veneration of icons which she kept in her chambers in the imperial palace. Theophilus' health eventually failed and he died on 20 January 842. He was about twenty-nine years old.

Following the death of her husband, Theodora served as regent for her son Michael. She overrode Theophilus' ecclesiastical policy and summoned a council under the patriarch Methodius, in which the veneration, but not worship, of icons was finally restored and the iconoclastic clergy deposed. *

* The Lectionary, via Wikipedia, http://satucket.com/lectionary/Theodora.html