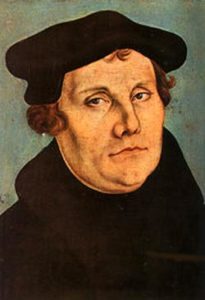 O God, our refuge and our strength, who raised up your servant Martin Luther to reform and renew your church in the light of your word: Defend and purify the church in our own day and grant that, through faith, we may boldly proclaim the riches of your grace, which you have made known in Jesus Christ our Savior, who with you and the Holy Spirit, lives and reigns, one God, now and for ever. Amen.

Martin Luther was born November 10, 1483, at Eisleben, in Germany. His intellectual abilities were evident early, and his father planned a career for him in law. Luther’s real interest lay elsewhere, however, and in 1505, he entered the local Augustinian monastery. He was ordained a priest on April 3, 1507.
In October 1512, Luther received his doctorate in theology, and shortly afterward he was installed as a professor of biblical studies at the University of Wittenberg. His lectures on the Bible were popular, and within a few years he made the university a center for biblical humanism. As a result of his theological and biblical studies, he called into question the practice of selling indulgences. On the eve of All Saints’ Day, October 31, 1517, he posted on the door of the castle church in Wittenberg the notice of an academic debate on indulgences, listing 95 theses for discussion. As the effects of the theses became evident, the Pope called upon the Augustinian order to discipline their member. After a series of meetings, political maneuvers, and attempts at reconciliation, Luther, at a meeting with the papal legate in 1518, refused to recant.
Luther was excommunicated on January 3, 1521. The Emperor Charles V summoned him to the meeting of the Imperial Diet at Worms. There Luther resisted all efforts to make him recant, insisting that he had to be proved in error on the basis of Scripture. The Diet passed an edict calling for the arrest of Luther. Luther’s own prince, the Elector Frederick of Saxony, however, had him spirited away and placed for safekeeping in his castle, the Wartburg.

There Luther translated the New Testament into German and began the translation of the Old Testament. He then turned his attention to the organization of worship and education. He introduced congregational singing of hymns, composing many himself, and issued model orders of services. He published his large and small catechisms for instruction in the faith. During the years from 1522 to his death, Luther wrote a prodigious quantity of books, letters, sermons, and tracts. Luther died at Eisleben on February 18, 1546. *

A Great Cloud of Witnesses - A Calendar of Commemorations, Church Publishing, Copyright © 2016 by The Domestic and Foreign Missionary Society of The Protestant Episcopal Church in the United States of America, https://extranet.generalconvention.org/staff/files/download/19349
Posted by Whit+ at 6:11 AM