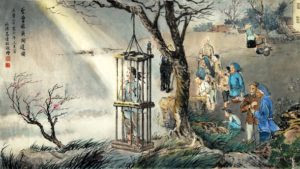 Lord Jesus Christ, who willingly walked the way of the cross: Strengthen your church through the witness of your servants Agnes Tsao Kou Ying, Agatha Lin Zhao, and Lucy Yi Zhenmei to hold fast to the path of discipleship even unto death; for with the Father and Holy Spirit you live and reign, one God, for ever and ever. Amen.

Agnes Tsao Kou Ying (1821 – 1 March 1856 was a Chinese layperson who was martyred for preaching the Gospel to the Chinese in Guangxi.

Her family was a traditional Catholic family originally from Sichuan Province. When Agnes became eighteen, she married a local farmer, but her brother- and sister-in-law treated her as an outsider (for she was Christian) and did not consider her a part of the family. Therefore, Agnes was left with little to eat. Things became worse for Agnes when her husband died after two years and she was driven out of the house.

One day, when Fr. Ma (Auguste Chapdelaine) was in town, he discovered how well Agnes knew the faith and asked her to move to Guangxi Province for some missionary work, especially for teaching the Catholic faith to some 30-40 Catholic families living there. She also taught cooking and household management.

In 1856, when she was helping out in Yaoshan, Guangxi (near present-day Guilin, Guizhou), the local government decided to take some measures against the Christians living in that area. Agnes was taken into custody along with many other Catholics who were soon released; only Agnes and Father Ma had to stay in prison. Father Ma later died in prison. The county magistrate tried to persuade Agnes to deny her faith under the promise that if she did, she would be released. However, Agnes was unmoved. Then the magistrate threatened torture, but she showed no fear. Finally, on January 22, the magistrate decided on her punishment. He had her locked in a cage so small that she could only stand up, but her spirit never failed. She prayed repeatedly, "God, have mercy on me; Jesus save me!" She died three days later.

Agatha Lin Zhao also was born into a Catholic family, in 1817. She became a school teacher in Mao-ken, Langdai, Guizhou, but was arrested for her faith. She refused to renounce Christianity and was beheaded on Jan. 28, 1858.

She should not be confused with Lin Zhou, a Chinese Christian who was executed in 1968 during China's Cultural Revolution.

As she matured she developed a love for reading and study. At age 20, in the midst of her higher education she grew very ill. After her recovery Lucy took her spiritual life still more seriously. She devoted herself to the discipline of prayer with great devotion, assuming a way of life much like that of a religious while continuing to assist in the support of her family.

After her father died, she lived with her brother and mother, using part of her leisure time to teach the faith to children nearby. The parish priest, who asked her to teach at the school in Mianyang, noticed her devotion and reliable knowledge of her faith. Full of enthusiasm for spreading the Gospel, she went on doing missionary work. However, for her own safety she decided to stay at the convent of lay virgins.

In 1862, she went with Fr. Wen Nair to open a mission in Jiashanlong, but just then the administrator of Guizhou Province, began to stir up hatred against Christians, which the local magistrate supported. As a result, Father Wen and several others were all imprisoned and sentenced to death without a formal trial. On February 18, the day of their execution, they met Yi Zhenmei on the road. She was also jailed and put on trial that very day and sentenced to death, because she refused to renounce her faith. The following day at noon, February 19, 1862, she was beheaded. Brave believers took the bodies of all five martyrs to the Liuchonnguan seminary grounds for burial. *

* The Lectionary, via Wikipedia, http://www.satucket.com/lectionary/Chinese_Martyrs.html