Even though the spring semester is almost over, a start-up meeting for Canterbury, the Episcopal campus ministry, is scheduled next Thursday, May 3, at 4:30 p.m. This first meeting will be on the ULM campus in 117 Stubbs Hall.

We will make some plans for fall, but also find out if there's any interest in meeting during summer school. Deacon Bette is contacting students she knows about who might be interested, but anyone who knows a college-age student is encouraged to invite them to the meeting and give their name and contact information to Deacon Bette.

Participation in Canterbury is open to all college students, regardless of religious affiliation.


The Very Rev. Dr. Jacob W. Owensby was elected April 21 as fourth bishop of the Episcopal Diocese of Western Louisiana.


Owensby, 54, dean of St. Mark’s Cathedral in Shreveport, Louisiana, was elected on the sixth ballot from a field of three candidates. One other nominee withdrew after the second ballot, two others withdrew after the third, and a fourth after the fifth. Owensby received 78 votes of 143 cast in the lay order and 30 of 58 cast in the clergy order.
The election was held at a special convention at St. James’ Church in Alexandria. Delegates participated in a service of Holy Eucharist before balloting began.
Owensby will succeed the Rt. Rev. D. Bruce MacPherson, who will retire in July after 10 years as bishop of the diocese.
Shortly after his election, Dean Owensby said: “I am humbled to be called to be the fourth Bishop of Western Louisiana and filled with affection for the good people who make this part of our state their geographical and spiritual home.  Joy, excitement, and anticipation have me a little tongue-tied right now.  But I can say that my first and most important job is to love the people of this Diocese and to help them grow in their witness to the extravagant love of God in Jesus Christ.  I am especially looking forward to building deep relationships with my fellow clergy, visiting with our congregations and helping them to grow in vitality, and serving our Lord together with these wonderful people.”
Owensby has been dean of St. Mark’s Cathedral since January 2009. He previously served as rector of Emmanuel Church, Webster Groves, Missouri; as rector of St. Stephen’s Church, Huntsville, Alabama; and as assistant rector at St. Mark’s Episcopal Church, in Jacksonville, Florida. He holds bachelor’s, master’s and doctoral degrees in philosophy from Emory University, and a master of divinity degree from School of Theology at the University of the South. He was ordained to the priesthood in 1997.
He is married to Joy Bruce Owensby, and they have three children; Andrew (23), Meredith (19) and Patrick (15).
Because the election took place within 120 days of a meeting of General Convention, the House of Deputies and a majority of bishops with jurisdiction must consent to the election during their meeting in Indianapolis in July 2012.
Pending necessary consents, the consecration is due to take place at 10 a.m. on July 21 at St. Mark’s Cathedral.
Taken from the Episcopal News Service and the Diocese of Western Louisiana website
Posted by Whit+ at 8:32 PM 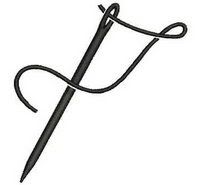 The Kneeling Needlers are now needling (and kneeling, I suppose) at a new time. We received notice that the new time on Tuesdays is now nine-thirty - not the old time - which was ten and contained no "n's" at all untill the end of the ten. Now that you know, please make note of it and notify others.

Our new Adult Education Class begins on April 22, 2012 at 9:15 in the Conference Room. We will read and discuss Your Bible! The Study Begins. You can get a copy of the text from Fr. Whit. They are only $12. Don't forget to bring your Bible too!

Deacon Bette is behind in blogging her sermons. But, hey, they're still relevant! She has just posted a sermon she preached February 4, 2010 at Christ Church in St. Joseph. It is called "Rise and Serve" and is based on the story of Jesus healing Simon Peter's Mother-in-Law. Go to: http://the-deacons-sermons.blogspot.com/
Posted by Whit+ at 7:45 PM

On Wednesday, April 18, 2012, St. Alban's popular Bible Study and Supper, which began during Lent, will continue. We will use the Serendipity Bible and start a study of St. Paul's Epistle (or letter) to the Romans.

Of the various methods of Bible Study that we tried during Lent, this one was one of the most popular. Each session begins with some opening questions that address the themes of the reading for the evening. Then we dig  in - looking at the details of that portion of the letter. Lastly, we pray with one another.

Each session will include a simple supper provided by a member of the group on a rotational basis. Come for Holy Eucharist and Unction at 5:30 p.m. each Wednesday and stay for Bible Study and Supper. You'll be nourished in more ways than one.
Posted by Whit+ at 8:31 PM

The next regular meeting of the Daughters of the King will be Wednesday, April 18, 2012 at 6:15 p.m. in the Conference Room. The meeting will follow the Wednesday evening Holy Eucharist and Unction liturgy at 5:30 p.m. Members are welcome to stay for dinner and Bible Study in McLean Hall after the meeting.
Posted by Whit+ at 8:13 PM

There is a very interesting article on the Episcopal News Service (ENS) website about a program that encourages people to try the read the entire Bible in a year. You can find the article here - The Bible Challenge: a ‘marathon’ of a read. Are you up to this challenge?
Posted by Whit+ at 9:54 PM Alleluia! Christ is risen.
The Lord is risen indeed. Alleluia!

The Good Friday Liturgy will begin on Friday, April 6, 2012 at Noon.

On Good Friday evening we will walk the Way of the Cross (Stations of the Cross) at 6:00 p.m.

Please join us for one or both!

Special Late Notice - Anyone who wants can join Fr. Whit in the Conference Room following Stations of the Cross to watch an updated version of Andrew Lloyd Webber's Jesus Christ Super Star.
Posted by Whit+ at 9:11 PM 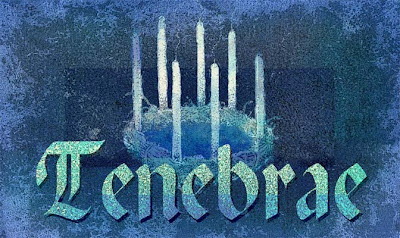 The name Tenebrae is from the Latin word for “darkness” or “shadows.” The service symbolizes the growing darkness as we move toward Good Friday and the return of the light at Easter. The liturgy is characterized by the gradual extinguishing of candles and other lights until only a single candle, considered a symbol of our Lord remains. Toward the end of the service this candle is hidden, typifying the apparent victory of the forces of evil. At the very end, a loud noise is made, symbolizing the earthquake at the time of the resurrection (Matthew 28:2), the candle is restored to its place, and by its light all depart in silence.