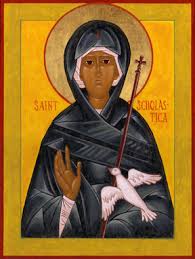 Assist us, O God, to love one another as sisters and brothers, and to balance discipline with love and rules with compassion, according to the example shown by your servant Scholastica; for the sake of your Son Jesus Christ our Lord, to whom with you and the Holy Spirit be all honor and glory, now and for ever. Amen.

Scholastica (c. 480 – 10 February 543) is a saint of the Roman Catholic Church and the Eastern Orthodox Churches. She is the foundress of the women's branch of Benedictine Monasticism.

According to the Dialogues of Gregory the Great, Scholastica was born c. 480 in Nursia, Umbria, of wealthy parents. While Gregory states that Scholastica was Benedict's sister, a later tradition, says she was his twin. Whether this is meant biologically or allegorically (spiritually) or both is not clear. Gregory the Great says she was dedicated to God from a young age. She and her brother Benedict were brought up together until the time he left to pursue studies in Rome.

Benedictine tradition holds that Scholastica established a hermitage about five miles from Monte Cassino and that this was the first "Benedictine" convent.

The most commonly told story about her is that she would, once a year, go and visit her brother at a place near his abbey, and they would spend the day worshiping together and discussing sacred texts and issues.

One day they had supper and continued their conversation. When Benedict indicated it was time for him to leave, perhaps sensing the time of her death was drawing near, Scholastica asked him to stay with her for the evening so they could continue their discussions. Not wishing to break his own Rule, Benedict refused, insisting that he needed to return to his cell. At that point, Scholastica closed her hands in prayer, and after a moment, a wild storm started outside of the guest house in which they were housed. Benedict asked, "What have you done?", to which she replied, "I asked you and you would not listen; so I asked my God and he did listen. So now go off, if you can, leave me and return to your monastery." Benedict was unable to return to his monastery, and they spent the night in discussion.

Three days later, from his cell, he saw his sister's soul leaving the earth and ascending to heaven in the form of a shining white dove. Benedict had her body brought to his monastery, where he caused it to be laid in the tomb which he had prepared for himself. *

* The Lectionary, via Wikipedia, http://www.satucket.com/lectionary/scholastica.html