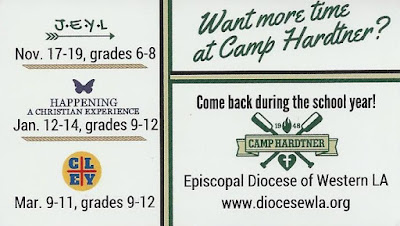 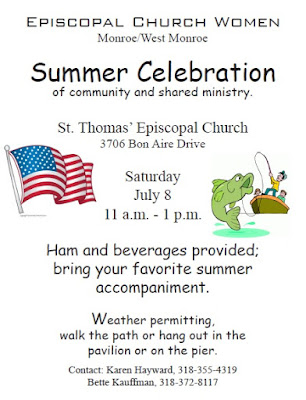 The Archdeacon Bette Jo Kauffman bounces around from church to church - that is her job! 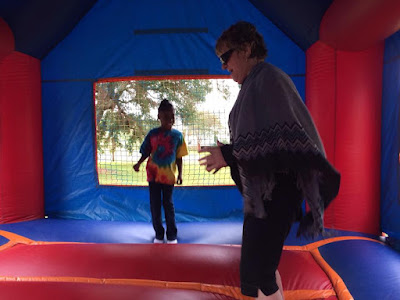 That is because the Archdeacon works first and foremost for the Bishop and serves the whole church. We learned yesterday from the Bishop (both St. Thomas' and St. Alban's), that the Archdeacon will soon be bouncing on to her next assignment.

That is her story to tell, but the Episcopal church is small and we all talk - so you may hear it somewhere else first.

Thanks for all you've given us Bette Jo and prayers for your continued ministry to the Church!

For those of you who missed it... Bishop Jake Owensby's sermon for The Second Sunday after Pentecost given at St. Alban's Episcopal Church, Monroe, Louisiana and our visitors from Iglesia Episcopal La Esperanza de Familias Unidas. Thanks, Bishop and Happy Father's Day!

The apostle Paul tells us that hope does not disappoint. Some will find this naive.
After all, he was beaten and stoned. Slandered, shipwrecked, snake-bit, and imprisoned. Eventually, the Romans beheaded him.

But once you know more of the story, it actually gets harder to swallow Paul’s apparently sunny attitude.
Paul wasn’t just banking on a happy ending for his own personal story. The substance of Paul’s hope was the reconciliation of all people. All People. Everywhere.
We humans would no longer divide ourselves into competing tribes. Us and them. Jew and Greek. Slave and free.
Every step Paul took was animated by his commitment to a world where difference didn’t divide. Where diversity brought strength. Where cooperation displaced competition. Where compassion and justice gave birth to perpetual peace. You know, the Kingdom of God.
In God’s Kingdom, the dignity of each would be respected by all. The well-being of all would be the heart’s desire of each. We would never again hear, “My tribe before all others.”
That was a lot to hope for in the Roman Empire. Mercilessly leveraging their military superiority, the Romans subdued all other states and cowed their own citizens.
The Pax Romana came down to this.
A privileged elite enjoyed immense wealth and exercised power with little accountability to the masses.
The vast majority of people lived in five-story walkups and struggled to put Ramen noodles on the dinner table. The ruling class brutally suppressed attempts to change the social order in favor of what they saw as the nobodies. Think crucifixion, for instance.

Paul had another sort of peace in mind. Jesus’ sort of peace. And yet, in the face of what Rome tried to pass off as peace, Paul says that hope does not disappoint.
And Paul has the same word for us today.
We have seen children and teachers slaughtered in their classrooms. Disgruntled citizens have opened fire on elected officials. Nightclubs have become shooting galleries.
Thousands of additional American troops are headed to Afghanistan after more than a decade of war.
Terrorists in Great Britain bombed concert goers and drove their vehicles into crowds of unsuspecting pedestrians. We’re experiencing a sharp rise in violence against ethnic minorities, non-Christian religious groups, and members of the LGBTQ community.
Given all of this, how can Paul say that hope does not disappoint?
I think it’s because Paul sees that hope is not a theme only of his individual story. Or mine or yours. Hope is a theme of our story. Paul understands his own life as part of a much larger story. The story of God embracing humans just as God finds us all throughout history.
Paul words about hope come after he has explained the significance of Abraham for the followers of Jesus. So let’s take a few minutes to reflect on the Abraham narrative.
God called Abraham and Sarah to leave their family and to start a new one. Actually, they were leaving their tribe.

In Abraham’s day, everybody was part of a tribe composed basically of their extended family. Nobody left their tribe. So this already makes Abraham’s story pretty unusual.
All other tribes were competitors if not enemies. Even allies were just potential adversaries. Violent clashes between tribes for land and resources was the norm.
Each tribe would do whatever it took to protect its way of life and to enhance its position among the tribes. Their conflicts could reach a nauseating level of savagery.
A conquering force would sometimes slaughter every man, woman, and child of their enemy. Or, the victor might put all the males to death and take the women for themselves. In any event, they didn’t want any males or male heirs left to plot future retaliation. And get this. The winners all said that God told them to do it.
If this is news to you, you’ve skipped significant parts of the Hebrew Scriptures. I understand. It’s disturbing reading.
Anyway, God sends Abraham and Sarah to a distant land to start a new tribe. Tribes come to be by having children, and that’s why God promises Abraham and Sarah that they will have a veritable Milky Way of kids.
Put a pin in that for now and we’ll come back to it. Right now, I want to circle back to this new tribe idea. God didn’t intend for Abraham to start a tribe that was just like other tribes only stronger. God wasn’t going to equip Abraham with a bigger military force and more advanced weapons.
All the other tribes were dedicated to taking what they could get and defending what they had accumulated. Every existing tribe was entirely self-interested.
Abraham’s new tribe was to grow from a radically new idea. Here’s how God explains it to Abraham. “You will be a blessing…. In you all the families of the earth shall be blessed.” (Genesis 12:2b, 3b)
Abraham was not starting up just one more tribe. He was going to be the father of an entirely new kind of tribe. That tribe’s purpose is to bless all comers. To restore God’s peace to creation. To end us-them consciousness once and for all.

Abraham and Sarah waited decades for Isaac. But by the time he came along, I suspect that they both realized that their Milky Way of descendants would be decades, centuries, millennia in the making.
Their personal stories—though important—were part of a vast web of stories. With God right at the center all along.
So you see, Abraham’s story continues in Christ. That’s how Paul saw it. In Christ, all the tribes of the world will be blessed. As Christ’s Body, his followers are that new kind of tribe that exists to bring God’s healing to the creation.
In his day, the same old self-centered tribes still surrounded his fledgling little tribe. Violence and oppression, exploitation and poverty still mar human life in our own day. In some seasons, like our own, these dehumanizing forces seem to be gaining the upper hand. But Paul would remind us not to despair.
Hope does not disappoint so long as we feed the hungry and shelter the homeless. So long as we refuse to greet the stranger as an enemy. So long as we insist that our own welfare depends upon our neighbor’s well-being. So long as we not only respect but guard the dignity of every human being.
So when Paul said that hope doesn’t disappoint, I think he was getting at something like this. Don’t just cling to hope. Be it.
Posted by Whit+ at 8:51 AM

This Sunday, June 18, is Father's Day. God our Father, in your wisdom and love you made all things. Bless and strengthen our fathers and those who have been fathers to us. Let the example of their faith and love shine forth. Grant that we, their sons, daughters, may honor them always with a spirit of profound respect. Grant this through Christ our Lord. Amen.

Bishop Jake Owensby will make his visit to St. Alban's that day. We will celebrate Holy Eucharist at 10:30 a.m. We will be joined by the folks from Iglesia Episcopal La Esperanza de Familias Unidas and the liturgy will be in Spanish and English. A short reception will follow so we all - including the Bishop - can get home to spend time with family! Join us!

Happy Trinity Sunday all! Praying for you all at Camp! 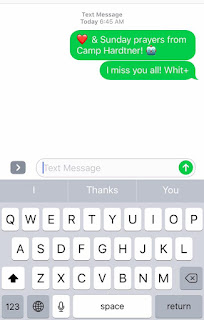 Next week is The Second Sunday after Pentecost, Father's Day, and Bishop Jake Owensby's visit. Join us for Holy Eucharist at 10:30 a.m. followed by a short reception and then go celebrate with Dad!