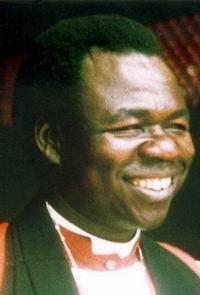 O God, whose Son the Good Shepherd laid down his life for his sheep: We give you thanks for your faithful shepherd, Janani Luwum, who after his Savior’s example gave up his life for the sake of his flock. Grant us to be so inspired by his witness that we make no peace with oppression, but live as those who are sealed with the cross of Christ, who died and rose again, and now lives and reigns with you and the Holy Spirit, one God, for ever and ever. Amen.

Janani Luwum was born in 1922. His father was a convert to Christianity. Janani was sent to school and eventually became a schoolteacher. In 1948 he was converted. He became very active in the East African revival movement, and became a lay reader, then a deacon, and then a priest in 1956. He was chosen to study for a year at St Augustine's College in Canterbury, England. He returned to Uganda, worked as a parish priest, and then taught at Buwalasi Theological College. He made a second visit to Britain to study at the London College of Divinity, returning to Uganda to become Principal of Buwalasi. In 1969 he was consecrated bishop of Northern Uganda.

The Church in Uganda began with the deaths of martyrs (see Martyrs of Uganda, 3 June 1886, and James Hannington and his Companions, Martyrs, 29 October 1885). Around 1900, Uganda became a British protectorate, with the chief of the Buganda tribe as nominal ruler, and with several other tribes included in the protectorate. In 1962 Uganda became an independent country within the British Commonwealth, with the Bugandan chief as president and Milton Obote, of the Lango tribe, as Prime Minister. In 1966, Obote took full control of the government. In 1971, he was overthrown by General Idi Amin, Chief of Staff of the Armed Forces. Almost immediately, he began a policy of repression, arresting anyone suspected of not supporting him. Hundreds of soldiers from the Lango and Acholi tribes were shot down in their barracks. Amin ordered the expulsion of the Asian population of Uganda, about 55,000 persons, mostly small shopkeepers from India and Pakistan. Over the next few years, many Christians were killed for various offenses. A preacher who read over the radio a Psalm which mentioned Israel was shot for this in 1972.

In 1974 Janani Luwum he became Archbishop of Uganda, Rwanda, Burundi and Boga-Zaire. As we have seen, it was a time of widespread terror. Archbishop Luwum often went personally to the office of the dreaded State Research Bureau to help secure the release of prisoners.

Tension between Church and state worsened in 1976. Religious leaders, including Archbishop Luwum, jointly approached Idi Amin to share their concern. They were rebuffed. But Archbishop Luwum continued to attend Government functions. One of his critics accused him of being on the Government side and he replied: "I face daily being picked up by the soldiers. While the opportunity is there I preach the Gospel with all my might, and my conscience is clear before God that I have not sided with the present Government which is utterly self-seeking. I have been threatened many times. Whenever I have the opportunity I have told the President the things the churches disapprove of."

Early in 1977, there was a small army rebellion that was put down with only seven men dead. However, Amin determined to stamp out all traces of dissent. His men killed thousands, including the entire population of Milton Obote's home village. On Sunday, 30 January, Bishop Festo Kivengere preached on "The Preciousness of Life" to an audience including many high government officials. He denounced the arbitrary bloodletting, and accused the government of abusing the authority that God had entrusted to it. The government responded on the following Saturday (5 February) by an early (1:30am) raid on the home of the Archbishop, Janani Luwum, ostensibly to search for hidden stores of weapons.

The Archbishop called on President Amin to deliver a note of protest, signed by nearly all the bishops of Uganda, against the policies of arbitrary killings and the unexplained disappearances of many persons. Amin accused the Archbishop of treason, produced a document supposedly by former President Obote attesting his guilt, and had the Archbishop and two Cabinet members (both committed Christians) arrested and held for military trial.

On 16 February, the Archbishop and six bishops were tried on a charge of smuggling arms. Archbishop Luwum was not allowed to reply, but shook his head in denial. The President concluded by asking the crowd: "What shall we do with these traitors?" The soldiers replied "Kill him now". The Archbishop was separated from his bishops. As he was taken away Archbishop Luwum turned to his brother bishops and said: "Do not be afraid. I see God's hand in this."

The three (the Archbishop and the two Cabinet members) met briefly with four other prisoners who were awaiting execution, and were permitted to pray with them briefly. Then the three were placed in a Land Rover and not seen alive again by their friends. The government story is that one of the prisoners tried to seize control of the vehicle and that it was wrecked and the passengers killed. The story believed by the Archbishop's supporters is that he refused to sign a confession, was beaten and otherwise abused, and finally shot. His body was placed in a sealed coffin and sent to his native village for burial there. However, the villagers opened the coffin and discovered the bullet holes. In the capital city of Kampala a crowd of about 4,500 gathered for a memorial service beside the grave that had been prepared for him next to that of the martyred bishop Hannington. In Nairobi, the capital of nearby Kenya, about 10,000 gathered for another memorial service. Bishop Kivengere was informed that he was about to be arrested, and he and his family fled to Kenya, as did the widow and orphans of Archbishop Luwum.

The following June, about 25,000 Ugandans came to the capital to celebrate the centennial of the first preaching of the Gospel in their country, among the participants were many who had abandoned Christianity, but who had returned to their Faith as a result of seeing the courage of Archbishop Luwum and his companions in the face of death. *