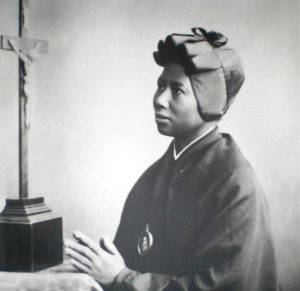 O God of Love, you delivered your servant Josephine Margaret Bakhita from the bondage of slavery to serve you in true freedom; by her example help us to see those enslaved among us, and work to release them from their chains. In your mercy, give to all survivors healing from their wounds and joy in their liberation; through Jesus Christ our Lord. Amen.

Josephine Margaret Bakhita, F.D.C.C., (ca. 1869 – 8 February 1947) was a Sudanese-Italian Canossian religious sister active in Italy for 45 years, after having been in a slave in Sudan.

She was born around 1869 in Darfur (now in western Sudan) in the village of Olgossa. Her respected and reasonably prosperous father was brother of the village chief. She was surrounded by a loving family of three brothers and three sisters.

Sometime between the age of seven to nine, probably in February 1877, she was seized by Arab slave traders, who had abducted her elder sister two years earlier. She was forced to walk barefoot about 960 kilometres (600 mi) to El Obeid and was sold and bought twice before she arrived there. Over the course of twelve years (1877–1889) she was sold three more times and then given away.

Bakhita was not the name she received from her parents at birth. It is said that the trauma of her abduction caused her to forget her own name; she took one given to her by the slavers, bakhita, Arabic for "lucky" or "fortunate".

In El Obeid, Bakhita was bought by a rich Arab who used her as a maid for his two daughters. They liked her and treated her well. Her fourth owner was a Turkish general, and she had to serve his mother-in-law and his wife, who were cruel to their slaves.

By the end of 1882, El Obeid came under the threat of an attack of Mahdist revolutionaries. The Turkish general began making preparations to return to his homeland and sold his slaves. In 1883 Bakhita was bought in Khartoum by the Italian Vice Consul Callisto Legnani, who treated her kindly and did not beat or punish her. Two years later, they escaped from besieged Khartoum and travelled to Suakin, which was the largest port of Sudan. In March 1885 they left Suakin for Italy and, once there, Legnani gave ownership of Bakhita to Signora Maria Turina Michieli. Turina Michieli. Bakhita's new owners took her to their family villa at Zianigo, near Mirano, Veneto.

When her owners went back to Sudan, Bakhita, on 29 November 1888, was left in the care of the Canossian Sisters in Venice. There, cared for and instructed by the Sisters, Bakhita encountered Christianity for the first time.

On 29 November 1889 an Italian court ruled that Bakhita had never legally been a slave. She chose to remain with the Canossians, and, on 9 January 1890, was baptized with the names of Josephine Margaret and Fortunata (which is the Latin translation for the Arabic Bakhita).

On 7 December 1893 Josephine Bakhita entered the novitiate of the Canossian Sisters and on 8 December 1896 she took her vows.

During her 42 years in Schio, Bakhita was employed as the cook, sacristan and portress (door keeper) and was in frequent contact with the local community. Her gentleness, calming voice, and ever-present smile became well known. Her special charisma and reputation for sanctity were noticed by her order; the first publication of her story (Storia Meravigliosa by Ida Zanolini) in 1931, made her famous throughout Italy.

Her last years were marked by pain and sickness. She used a wheelchair but she retained her cheerfulness. Bakhita died on 8 February 1947. For three days her body lay on display while thousands of people arrived to pay their respects.

Bakhita's legacy is that transformation is possible through suffering. Her story of deliverance from physical slavery also symbolises all those who find meaning and inspiration in her life for their own deliverance from spiritual slavery. She is venerated as a modern African saint, and as a statement against the brutal history of slavery. She has been adopted as the patron saint of Sudan and human trafficking survivors. *

The Lectionary, via Wikipedia, http://www.satucket.com/lectionary/Bakhita.html 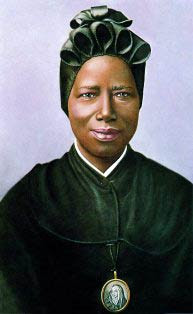