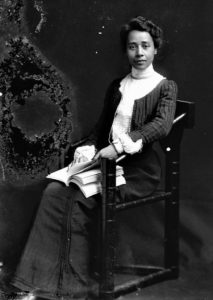 Almighty God, who inspired your servant Anna Julia Haywood Cooper with the love of learning and the skill of teaching: Enlighten us more and more through the discipline of learning, and deepen our commitment to the education of all your children; through Jesus Christ our Lord, who lives and reigns with you and the Holy Spirit, one God, for ever and ever. Amen.

Anna Julia Haywood Cooper (August 10, c 1859- February 27, 1964). Educator, advocate and scholar. Born in Raleigh, North Carolina to an enslaved woman and a white man, presumably her mother's master, Anna Julia was an academically gifted child and received a scholarship to attend St. Augustine Normal School and Collegiate Institute, a school founded by the Episcopal Church to educate African-American teachers and clergy. There she began her membership in the Episcopal Church. After forcing her way into a Greek class designed for male theology students, Anna Julia later married the instructor, George A.C. Cooper, the second African-American ordained to the Episcopal priesthood in North Carolina. After her husband's death in 1879, Cooper received degrees in mathematics from Oberlin College, and was made principal of the only African American high school in Washington D.C.. She was denied reappointment in 1906 because she refused to lower her educational standards. Throughout her career, Cooper emphasized the importance of education to the future of African Americans, and was critical of the lack of support they received from the church. An advocate for African-American women, Cooper assisted in organizing the Colored Women's League and the first Colored Settlement House in Washington, D.C. She wrote and spoke widely on issues of race and gender, and took an active role in national and international organizations founded to advance African Americans.  At the age of fifty-five she adopted the five children of her nephew. In 1925, Cooper became the fourth African-American woman to complete a Ph.D. degree, granted from the Sorbonne when she was sixty-five years old. From 1930-1942, Cooper served as president of Frelinghuysen University.*

* The Lectionary, via the Episcopal Women's History Project, http://satucket.com/lectionary/Anna_Cooper.htm