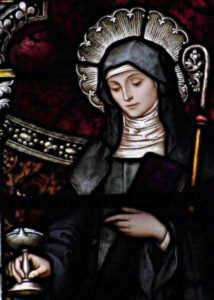 The Collect:
O God, whose servant Brigid, kindled with the flame of your love, became a shining light in your Church: Grant that we also may be aflame with the spirit of love and discipline, and walk before you as children of light; through Jesus Christ our Lord, who lives and reigns with you, in the unity of the Holy Spirit, one God, now and for ever. Amen.
Bridget (Brigid, Bride, Bridey, or in Welsh, Ffraid) of Kildare was born around 450 into a Druid family, being the daughter of Dubhthach, court poet to King Loeghaire. At an early age, she decided to become a Christian, and she eventually took vows as a nun. Together with a group of other women, she established a nunnery at Kildare (meaning, Church of the Oak). She was later joined by a community of monks led by Conlaed. Kildare had formerly been a pagan shrine where a sacred fire was kept perpetually burning, and Bridget and her nuns, instead of stamping out the fire, kept it going but gave it a Christian interpretation. (This was in keeping with the general process whereby Druidism in Ireland gave way to Christianity with very little opposition, the Druids for the most part saying that their own beliefs were a partial and tentative insight into the nature of God, and that they recognized in Christianity what they had been looking for.) Bridget as an abbess participated in several Irish councils, and her influence on the policies of the Church in Ireland was considerable.
Many stories of her younger days deal with her generosity toward the needy. This aspect of her character has been the subject of a poem. Below is a single verse…
"The Giveaway" (from The Love Letters of Phyllis McGinley, New York, Viking Press, 1954)
Saint Bridget was
A problem child.
Although a lass
Demure and mild,
And one who strove
To please her dad,
Saint Bridget drove
The family mad.
For here's the fault in Bridget lay:
She would give everything away. *
* The Lectionary, James Kiefer, http://satucket.com/lectionary/Brigid.htm (The full poem is here along with further discussion.)
Posted by Whit+ at 7:51 AM