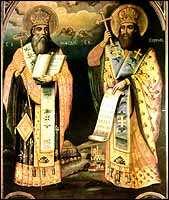 Almighty and everlasting God, who by the power of the Holy Spirit moved your servants Cyril and Methodius to bring the light of the Gospel to a hostile and divided people: Overcome all bitterness and strife among us by the love of Christ, and make us one united family under the banner of the Prince of Peace; who lives and reigns with you and the Holy Spirit, one God, now and for ever. Amen.

Cyril (originally Constantine) and Methodius were brothers, from a noble family in Thessalonika, a district in northeastern Greece. Constantine was the younger, born in about 827, and his brother Methodius in about 825.  They both entered the priesthood. Constantine undertook a mission to the Arabs, and then became a professor of philosophy at the imperial school in Constantinople and librarian at the cathedral of Santa Sophia. Methodius became governor of a district that had been settled by Slavs. Both brothers then retired to monastic life. In about 861, the Emperor Michel III sent them to work with the Khazars northeast of the Black Sea in the Dnieper-Volga region of what was later Russia. They learned the Khazar language and made many converts, and discovered what were believed to be relics of Clement, an early Bishop of Rome.

In about 863, Prince Rotislav, the ruler of Great Moravia (an area including much of what was later Czechoslovakia), asked the emperor for missionaries, specifying that he wanted someone who would teach his people in their own language (he had western missionaries, but they used only Latin). The emperor and the Patriarch Photius sent Methodius and his brother Constantine, who translated the Liturgy and much of the Scriptures into Slavonic.

Since Slavonic had no written form, they invented an alphabet for it, the Glagolitic alphabet, which gave rise to the Cyrillic alphabet (named for Constantine aka Cyril), which is used to write Russian and (with modifications) several related languages today. They used the Greek alphabet as their basis, writing a letter in two forms when two similar sounds in Slavonic each needed a letter (hence, in modern Russian, we have "plain a" written "A" and "fancy a" written like a backward "R" representing the sounds of hard and soft (or unpalatalized and palatalized) a, represented approximately in English by "ah" and "yah"). When no Greek letter was close, then they borrowed from Hebrew (the letter TZADDI for the sound "ts" as in "tsar", and the letter SHIN for the sound "sh", and a variant on it for the sound "shch" as in "Khrushchev", and so on).  The resulting alphabet had 43 letters. It has since undergone development, chiefly simplification and the omission of letters. Thus, the modern Russian alphabet has only 32 letters. The Cyrillic alphabet with minor variations is used today for Russian, Ukrainian, and other languages of the former USSR, and also for Bulgarian and Serbian and formerly for Rumanian.  (Serbs and Croats both speak Serbo-Croatian, but the Serbs, who are traditionally East Orthodox, write it with the Cyrillic alphabet, while the Croats, who are traditionally Roman Catholic, write it with the Latin alphabet. Before the first World War, there were many muslims (regarded as Turks) living in Greece, and many Christians (regarded as Greeks) living in western Turkey. Each group spoke the language of the country in which it lived, but the Greek-speaking Turks in Greece wrote Greek using the Arabic script that was then standard for writing Turkish, and the Turkish-speaking Greeks in Turkey wrote Turkish in the Greek alphabet. For some reason, the alphabet matters to rival religious groups.)

Thus the brothers were the first to produce written material in the Slavic languages, and are regarded as the founders of Slavic literature.

The brothers encountered missionaries from Germany, representing the western or Latin branch of the Church, and more particularly representing the Holy Roman Empire as founded by Charlemagne, and committed to linguistic, and cultural uniformity. They insisted on the use of the Latin liturgy, and they regarded Moravia and the Slavic peoples as their rightful mission field. When friction developed, the brothers, unwilling to be a cause of dissension among Christians, went south toward Venice, and then from Venice to Rome to see the Pope, hoping to reach an agreement that would avoid quarreling between missionaries in the field. They brought with them the above-mentioned relics of Clement, third bishop of Rome after the Apostles (see 23 November). They arrived in Rome in 868 and were received with honor.  Constantine entered a monastery there, taking the name Cyril, by which he is now remembered. However, he died only a few weeks thereafter. He is buried in Rome in the Church of San Clemente.

The Pope (Adrian II) gave Methodius the title of Archbishop of Sirmium (now Sremska Mitrovica in Yugoslavia) and sent him back in 869, with jurisdiction over all of Moravia and Pannonia, and authorization to use the Slavonic Liturgy. Soon, however, Prince Rotislav, who had originally invited the brothers to Moravia, died, and his successor did not support Methodius. In 870 the Frankish king Louis and his bishops deposed Methodius at a synod at Ratisbon, and imprisoned him for a little over two years.  The pope (John VIII) secured his release, but told him not to use the Slavonic Liturgy any more. In 878 he was summoned to Rome on charges of heresy and using Slavonic. This time Pope John was convinced by his arguments and sent him back, cleared of all charges, and with permission to use Slavonic. He died 6 April 885 in Velehrad, the old capitol of Moravia. The Carolingian bishop who succeeded him, Wiching, suppressed the Slavonic Liturgy and forced the followers of Methodius into exile. Many found refuge with King Boris of Bulgaria (852-889), under whom they reorganized a Slavic-speaking Church. Meanwhile, Pope John's successors adopted a Latin-only policy which lasted for centuries.

Today Cyril and Methodius are honored by Eastern and  Western Christians alike, and the importance of their work in preaching and worshiping in the language of the people is recognized on all sides. *