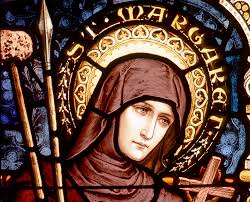 Grant, O God, to all your people, as to your servant Margaret of Cortona, the spirit of repentance and supplication, that we might seek and desire nothing in this transitory life above you; through Jesus Christ our Lord. Amen.

Margaret was born of farming parents in Laviano. As she grew older, Margaret became more willful and reckless. At the age of 17 she met a young man, and she ran away with him. Soon Margaret found herself installed in the castle, not as her master's wife, for convention would never allow that, but as his mistress. For ten years, she lived with him near Montepulciano and bore him a son.

When her lover failed to return home from a journey one day, Margaret became concerned. The unaccompanied return of his favorite hound alarmed Margaret, and the hound led her into the forest to his murdered body. That crime shocked Margaret into a life of prayer and penance.Margaret returned to his family all the gifts he had given her and left his home. With her child, she returned to her father's house, but her stepmother would not have her. Margaret and her son then went to the Franciscan friars at Cortona, where her son eventually became a friar. She fasted, avoided meat, and subsisted on bread and vegetables.

In 1277, after three years of probation, Saint Margaret joined the Third Order of Saint Francis and chose to live in poverty. She pursued a life of prayer and penance at Cortona, and there established a hospital for the sick, homeless and impoverished.

Twice, following divine command, she challenged the Bishop of Arezzo, Guglielmo Ubertini Pazzi, in whose diocese Cortona lay, because he lived and warred like a prince. She moved to the ruined Church of St Basil, now Santa Margherita, and spent her remaining years there; she died on 22 February 1297. *

* The Lectionary, via Wikipedia, http://www.satucket.com/lectionary/Margaret_Cortona.html