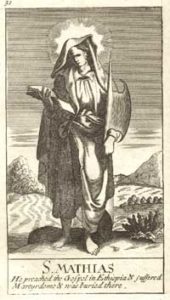 Almighty God, who in the place of Judas chose your faithful servant Matthias to be numbered among the Twelve: Grant that your Church, being delivered from false apostles, may always be guided and governed by faithful and true pastors; through Jesus Christ our Lord, who lives and reigns with you, in the unity of the Holy Spirit, one God, now and for ever. Amen.

After the Ascension of Our Lord, His followers at Jerusalem chose a replacement for Judas. The man chosen was Matthias, "and he was numbered with the Eleven." Apart from the information given in the first chapter of Acts, nothing is known of him. It would be a mistake to conclude from this that he was a failure and a bad choice as an apostle. We know as much as we do about Peter and Paul because Luke (a traveling companion of Paul) wrote extensively about them. About most of the other apostles (those belonging to the original twelve and later ones like Matthias) we know little after Pentecost on an individual basis.*