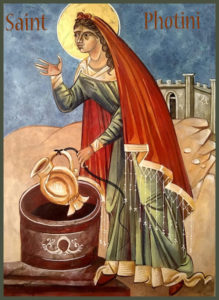 O Almighty God, whose most blessed Son revealed to the Samaritan woman that He is indeed the Christ, the Savior of the World; grant us to drink of the well that springs up to everlasting life that we may worship you in spirit and in truth through your Son, Jesus Christ our Lord. Amen.

The Samaritan woman at the well is a figure from the Gospel of John, in John 4:4–26. In Eastern Orthodox and Eastern Catholic traditions, she is venerated as a saint with the name Photine (also Photini, Photina, meaning "the luminous one").

In Eastern Christian tradition, the woman's name at the time of her meeting Jesus is unknown, though she was later christened "Photina". Her continuing witness is said to have brought so many to the Christian faith that she is described as "equal to the apostles". Eventually, having drawn the attention of Emperor Nero, she was brought before him to answer for her faith, suffering many tortures and dying a martyr after being thrown down a dry well. *

* The Lectionary, via Wikipedia, http://www.satucket.com/lectionary/photini.html