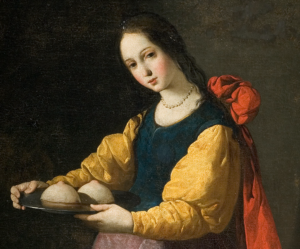 Almighty and everlasting God, who strengthened your martyr Agatha with constancy and courage: Grant us for the love of you to make no peace with oppression, to fear no adversity, and to have no tolerance for those who would use their power to abuse or exploit; Through Jesus Christ our Lord, to whom with you and the Holy Spirit be all honor and glory, now and for ever. Amen.

Saint Agatha of Sicily (c. 231 – c. 251 AD) is a Christian saint and virgin martyr. She was born at Catania or Palermo, Sicily, and she was martyred in approximately 251. She is the patron saint of breast cancer patients, martyrs, and wet nurses, among others.

One of the most highly venerated virgin martyrs of Christian antiquity, Agatha was put to death during the persecution of Decius (250–253) in Catania, Sicily, for her determined profession of faith.

Her written legend comprises "straightforward accounts of interrogation, torture, resistance, and triumph which constitute some of the earliest hagiographic literature".

According to the 13th-century Golden Legend, fifteen-year-old Agatha, from a rich and noble family, made a vow of virginity and rejected the amorous advances of the low-born Roman prefect Quintianus, who thought he could force her to turn away from her vow and force her to marry. His persistent proposals were consistently spurned by Agatha, so Quintianus, knowing she was a Christian during the persecution of Decius, had her arrested and brought before the judge. He was the judge.

He expected her to give in to his demands when she was faced with torture and possible death, but she simply reaffirmed her belief in God. To force her to change her mind, Quintianus sent Agatha to Aphrodisia, the keeper of a brothel, and had her imprisoned there, where she suffered a month of rape, assault, and efforts to get her to abandon her vow to God and go against her virtue.

Quintianus sent for her again, argued, threatened, and finally had her put in prison and had her tortured. Amongst the tortures she underwent was the cutting off of her breasts with pincers. After further dramatic confrontations with Quintianus, Agatha was then sentenced to be burnt at the stake, but an earthquake saved her from that fate; instead, she was sent to prison where St. Peter the Apostle appeared to her and healed her wounds.

Saint Agatha died in prison, probably in the year 251 according to the Legenda Aurea. Although the martyrdom of Saint Agatha is authenticated, and her veneration as a saint had spread beyond her native place even in antiquity, there is no reliable information concerning the details of her death. *

* The Lectionary, via Wikipedia, http://satucket.com/lectionary/Agatha_Sicily.html Note: Saint Agatha is often depicted iconographically carrying her excised breasts on a platter. For lots more info and to see more art - some very graphic - along with the tradition of making breast shaped pastry on the feast of St. Agatha which are found in many countries - see https://en.wikipedia.org/wiki/Agatha_of_Sicily