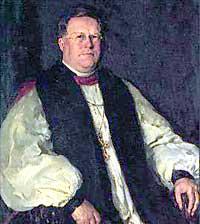 O God of light and love, you illumined your Church through the witness of your servant William Temple: Inspire us, we pray, by his teaching and example, that we may rejoice with courage, confidence, and faith in the Word made flesh, and may be led to establish that city which has justice for its foundation and love for its law; through Jesus Christ, the light of the world, who lives and reigns with you and the Holy Spirit, one God, now and for ever. Amen.

William Temple was a renowned teacher and preacher, regarded as one of the most exemplary Archbishops of Canterbury of the 20th century. His writings reflect a robust social theology that engages the challenges of modern industrialized society.

Temple was born October 15, 1881, and baptized three weeks later, on November 6, in Exeter Cathedral. His father, Dr. Frederick Temple, Bishop of Exeter and then of London, became Archbishop of Canterbury when William was fifteen. Growing up at the heart of the Church of England, William’s love for it was deep and lifelong.

Endowed with a brilliant mind, Temple took a first-class honors degree in classics and philosophy at Oxford, where he was then elected Fellow of Queen’s College. At the age of twenty-nine he became headmaster of Repton School, and then, in quick succession, rector of St. James’s Church, Piccadilly, Bishop of Manchester, and Archbishop of York.

Though he was never subject to poverty himself, he developed a passion for social justice which shaped his words and his actions. He owed this passion to a profound belief in the Incarnation. He wrote that in Jesus Christ God took flesh and dwelt among us, and, as a consequence, “the personality of every man and woman is sacred.”

In 1917, Temple resigned from St. James’s, Piccadilly, to devote his energies to the “Life and Liberty” movement for reform within the Church of England. Two years later, an Act of Parliament led to the setting up of the Church Assembly, which for the first time gave the laity a voice in Church matters.

As bishop, and later as archbishop, Temple committed himself to seeking “the things which pertain to the Kingdom of God.” He understood the Incarnation as giving worth and meaning not only to individuals but to all of life. He therefore took the lead in establishing the Conference on Christian Politics, Economics, and Citizenship (COPEC), held 1924. In 1940, he convened the great Malvern Conference to reflect on the social reconstruction that would be needed in Britain once the Second World War was over.

At the same time, he was a prolific writer on theological, ecumenical, and social topics, and his two-volume Readings in St. John’s Gospel, written in the early days of the war, rapidly became a spiritual classic.

In 1942, Temple was appointed Archbishop of Canterbury and reached an even wider audience through his wartime radio addresses and newspaper articles. However, the scope of his responsibilities and the pace he set himself took their toll. On October 26, 1944, he died at Westgate-on-Sea, Kent, after only two and a half years at Canterbury *

* A Great Cloud of Witnesses, Copyright © 2016 by The Domestic and Foreign Missionary Society of The Protestant Episcopal Church in the United States of America