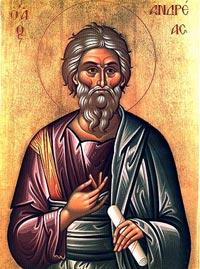 Almighty God, who gave such grace to your apostle Andrew that he readily obeyed the call of your Son Jesus Christ, and brought his brother with him: Give us, who are called by your Holy Word, grace to follow him without delay, and to bring those near to us into his gracious presence; who lives and reigns with you and the Holy Spirit, one God, now and for ever. Amen.

Most references to Andrew in the New Testament simply include him on a list of the Twelve Apostles, or group him with his brother, Simon Peter. But he appears acting as an individual three times in the Gospel of John. When a number of Greeks (perhaps simply Greek-speaking Jews) wish to speak with Jesus, they approach Philip, who tells Andrew, and the two of them tell Jesus (Jn 12:20-22). (It may be relevant here that both "Philip" and "Andrew" are Greek names.) Before Jesus feeds the Five Thousand, it is Andrew who says, "Here is a lad with five barley loaves and two fish." (Jn 6:8f) And the first two disciples whom John reports as attaching themselves to Jesus (Jn 1:35-42) are Andrew and another disciple (whom John does not name, but who is commonly supposed to be John himself -- John never mentions himself by name, a widespread literary convention). Having met Jesus, Andrew then finds his brother Simon and brings him to Jesus. Thus, on each occasion when he is mentioned as an individual, it is because he is instrumental in bringing others to meet the Savior. In the Episcopal Church, the Fellowship of Saint Andrew is devoted to encouraging personal evangelism, and the bringing of one's friends and colleagues to a knowledge of the Gospel of Christ.

Just as Andrew was the first of the Apostles, so his feast is taken in the West to be the beginning of the Church Year. (Eastern Christians begin their Church Year on 1 September.) The First Sunday of Advent is defined to be the Sunday on or nearest his feast (although it could equivalently be defined as the fourth Sunday before Christmas Day).

Several centuries after the death of Andrew, some of his relics were brought by a missionary named Rule to Scotland, to a place then known as Fife, but now known as St. Andrew's, and best known as the site of a world-famous golf course and club. For this reason, Andrew is the patron of Scotland.

When the Emperor Constantine established the city of Byzantium, or Constantinople, as the new capital of the Roman Empire, replacing Rome, the bishop of Byzantium became very prominent. Five sees (bishoprics) came to be known as patriarchates: Rome, Alexandria, Antioch, Jerusalem, and Byzantium. Now, the congregation at Rome claimed the two most famous apostles, Peter and Paul, as founders. Antioch could also claim both Peter and Paul, on the explicit testimony of Scripture, and of course Jerusalem had all the apostles. Alexandria claimed that Mark, who had been Peter's "interpreter" and assistant, and had written down the Gospel of Mark on the basis of what he had heard from Peter, had after Peter's death gone to Alexandria and founded the church there. Byzantium was scorned by the other patriarchates as a new-comer, a church with the political prestige of being located at the capital of the Empire, but with no apostles in its history. Byzantium responded with the claim that its founder and first bishop had been Andrew the brother of Peter. They pointed out that Andrew had been the first of all the apostles to follow Jesus (John 1:40-41), and that he had brought his brother to Jesus. Andrew was thus, in the words of John Chrysostom, "the Peter before Peter." As Russia was Christianized by missionaries from Byzantium, Andrew became the patron not only of Byzantium but also of Russia.

Andrew is the national saint of Scotland. George (23 Apr) is the national saint of England, Patrick (17 Mar) of Ireland, and Dewi = David (1 Mar) of Wales. George, who was a soldier, is customarily pictured as a knight with a shield that bears a red cross on a white background. This design is therefore the national flag of England. It is said that Andrew was crucified on a Cross Saltire -- an 'X' -shaped cross. His symbol is a Cross Saltire, white on a blue background. This is accordingly the national flag of Scotland. A symbol of Patrick is a red cross saltire on a white background. The crosses of George and Andrew were combined to form the Union Jack, or flag of Great Britain, and later the cross of Patrick was added to form the present Union Jack. Wales does not appear as such (sorry!). Whether there is a design known as the cross of David, I have no idea. *