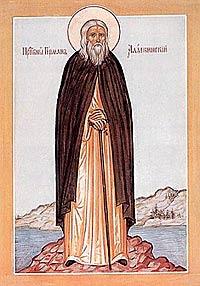 The Collect:
Almighty God, who raised up your servant Herman to be a light in the world, and to preach the Gospel to the people of Alaska: Illuminate our hearts, that we also in our own generation may show forth your praise, who called us out of darkness and into your marvelous light; through Jesus Christ our Lord, who lives and reigns with you and the Holy Spirit, one God, now and for ever. Amen.

Herman of Alaska (born 1756 or 1760 in Serpukhov, Russia – died December 13 or November 15, 1837 on Spruce Island, Alaska) was one of the first Eastern Orthodox missionaries to the New World, and is considered by Orthodox Christians to be the patron saint of the Americas.

Herman was born in the town of Serpukhov near Moscow around 1756. Herman is his name in monasticism; his birth name is unknown. At 16, he entered the Russian Orthodox monastic life at the Trinity-St. Sergius Hermitage near St. Petersburg. Eventually he was tonsured a monk, though he was never ordained to the priesthood. A request was made for a mission into the Alaskan territory. Herman was selected to go, along with seven other monks.

Herman and the other monks arrived on Kodiak Island on September 24, 1794. The monks converted the native Aleuts, and as time progressed they found themselves protecting the natives from exploitation and abuse. Because of this moral stance the monks themselves were abused, arrested and physically threatened. In time, enduring hardship, inclement weather, illness and more, Herman stood as the only remainder from the original band of missionaries, the others either being martyred for their faith, dying of natural causes or returning to Russia.

Herman eventually built a hermitage on Spruce Island, about a mile and a quarter from Kodiak Island. A small chapel was built as well, along with a school and guest house. The local people would visit him often. He devoted his life to prayer and to performing those services he could do as a simple monk who had not been ordained to the priesthood.

He died on November 15, 1837, but was not buried on Spruce Island until December 13 because a priest could not come to serve the funeral, and was forgotten until the first investigation of his life in 1867 by Bishop Peter of Alaska. He was named a saint by the Orthodox Church in America on 9 August 1970.*

*The Lectionary, via Wikipedia, http://www.satucket.com/lectionary/Hermen_Alaska.htm

Spruce Island is considered by many Orthodox Christians to be one of the holiest sites in North America. The island was home to the hermitage of Herman of Alaska during the early 1800's. Every year, in early August, the Orthodox Church in America celebrates the canonization of Saint Herman with a Liturgy, pilgrimage, and banquet. See below for a beautifully filmed video of this pilgrimage.
Posted by Whit+ at 5:32 AM