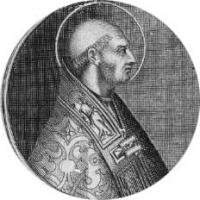 O Lord our God, grant that your Church, following the teaching of your servant Leo of Rome, may hold fast the great mystery of our redemption, and adore the one Christ, true God and true Man, neither divided from our human nature nor separate from your divine Being; through Jesus Christ our Lord, who lives and reigns with you and the Holy Spirit, one God, now and for ever. Amen.

Leo I (440-461) and Gregory I (590-604) are the only two bishops of Rome commonly called "the Great." Leo, at a time when the capital of the Empire had been moved to Constantinople, and the government even in Italy no longer had its headquarters at Rome, was the most important official in the city. To him fell such prosaic tasks as supervising the distribution of grain imports and reorganizing the municipal fire department. When Attila and the Huns invaded Italy in 452, he negotiated their withdrawal, and when Gaiseric (or Genseric) the Vandal captured Rome three years later, it was Leo who prevented the total destruction of the city. It is perhaps not surprising that the theory of papal supremacy gained much ground in his day.

In his day there were disagreements about the correct way to state the truth that Jesus Christ is both God and man. In 449 Leo wrote a letter (known as the Tome of Leo) to Bishop Flavian of Constantinople, in which he affirmed that Christ has two Natures in one Person. The letter was read in 451 by the Council of Chalcedon (the fourth Ecumenical Council), and judged by them to be sound doctrine. It contributed much to the creedal statements of that council.

Leo's influence on church government will naturally get mixed reviews. But for his defense of the belief that God was in Christ, reconciling the world unto himself, all Christians may thank God. *

Join us tonight for Evening Prayer and to learn a bit more about Leo the Great.