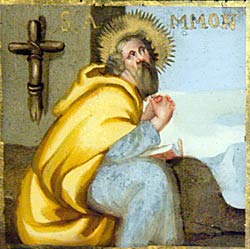 Drive far from your church, O God, every vain spirit of clerical ambition, that, like your servant Ammonius, we may refuse to conflate ordination and leadership, and may never confuse rank with holiness; in the name of your son Jesus Christ our Lord, who alone is our great High Priest. Amen.

Ammon, Amun, Ammonas (Greek: Aμμώνας), or Ammonius the Hermit (Greek: Aμμώνιος) was a 4th-century Christian ascetic and the founder of one of the most celebrated monastic communities in Egypt.

Pushed into marriage by his family at the age of 20, he managed to persuade his bride to take a vow of chastity together with him by the authority of St. Paul's Epistle to the Corinthians. They lived together this way for 18 years, when at her wish, they parted, and he retired to Scetis and Nitria, to the south of Lake Mareotis, where he lived 22 years, visiting his sister-wife twice a year.

He cooperated with Saint Anthony and gathered his monks under his direct supervision, thus forming a monastery from sole hermits. Traditionally, he is supposed to have been the first hermit to have established a monastery, known as Kellia, near Nitria. This is by no means verifiable, but it is more certain that Amun's piety and fame drew others to the region. He is considered to have died at the age of 62 years.*

The Lectionary, via Wikipedia, http://www.satucket.com/lectionary/Ammonius.html