Catherine of Alexandria, Barbara of Nicomedia, and Margaret of Antioch, Martyrs, c. 300

Embolden your church, O God, with the stories of your saints Catherine, Barbara, and Margaret, that we might face all trials and adversities with a fearless mind and an unbroken spirit, knowing that we are more than conquerors through Jesus Christ who strengthens us. Through the same Jesus Christ our Lord. Amen.

On this day are remembered three women martyrs who were some of the most popular saints in ancient and mediaeval times, but who are today regarded as of doubtful historicity. Nevertheless, their stories have inspired Christians over the centuries. 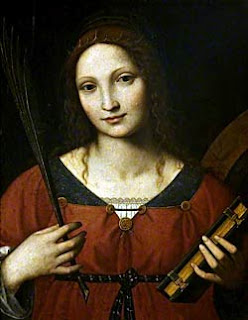 Catherine of Alexandria's story has caught the popular imagination of many generations (she is, for example, one of the personages from whom Joan of Arc claimed to receive regular visits and messages), although most scholars judge it to be simply a work of fiction with no historical basis. No references to her can be traced earlier than the ninth (or possibly the eighth) century.

It is said that Catherine was a Christian maiden of Alexandria in Egypt, possessed of beauty, brains, and noble birth. She rebuked the heathen emperor Maxentius for his idolatry, and he responded by offering to marry her if she would renounce her faith. She refused. Fifty philosophers were set to refute her in a public debate. She easily won every point, and made them look foolish. The emperor, a sore loser, had them burned alive. The emperor went out of town on business, and when he returned, he discovered that Catherine had converted his queen and the 200 soldiers of the empress's bodyguard. This was too much. He had the Empress and her soldiers put to death. Catherine was sentenced to be tortured on a spiked wheel, but the wheel flew apart and the fragments killed many of her accusers. After this and other marvels, Catherine was beheaded, and from her veins flowed not blood but milk. The angels carried her to Mount Sinai, where St. Catherine's Monastery is now located.

She is depicted carrying a spiked wheel, representing the manner in which it was proposed to put her to death. The "catherine-wheel," a form of fireworks that spins as it burns, is named for her.

Catherine is patron of preachers, philosophers, librarians (probably association with the Library of Alexandria), young girls, and craftsmen working with a wheel (potters, spinners, etc). The Mt. Sinai monastery was built by Justinian in 527, and has borne the name of Catherine since the eighth or ninth century. The monastery survives unmolested by the moslems (by express command of Mohammed) and has a vast but uncatalogued treasure of ancient manuscripts. One of the earliest known manuscripts of the complete New Testament, the Codex Sinaiaticus, was found there, borrowed by the finder, and never returned to the monastery. (I believe that it is now in the British Museum.) Since then, they have been a bit crusty to visiting scholars. 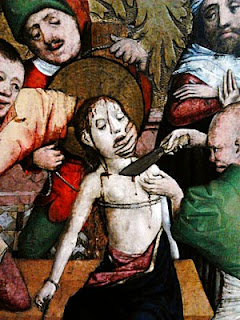 Barbara of Nicomedia, or Great Martyr Barbara, was an early Christian Greek saint and martyr. Accounts place her in the 3rd century in Heliopolis of Phoenicia, present-day Baalbek, Lebanon. There is no reference to her in the authentic early Christian writings nor in the original recension of Saint Jerome's martyrology. Her name can be traced to the 7th century, and veneration of her was common, especially in the East, from the 9th century.

Saint Barbara is often portrayed with miniature chains and a tower. As one of the Fourteen Holy Helpers, Barbara continues to be a popular saint in modern times, perhaps best known as the patron saint of armourers, artillerymen, military engineers, miners and others who work with explosives because of her old legend's association with lightning.

According to the hagiographies, Barbara, the daughter of a rich pagan, was carefully guarded by her father who kept her locked up in a tower in order to preserve her from the outside world. Having secretly become a Christian, she rejected an offer of marriage that she received through her father.

Dragged before the prefect of the province, Martinianus, who had her cruelly tortured, Barbara held true to her Christian faith. During the night, the dark prison was bathed in light and new miracles occurred. Every morning, her wounds were healed. Torches that were to be used to burn her went out as soon as they came near her. Finally, she was condemned to death by beheading. Her father himself carried out the death-sentence. However, as punishment for this, he was struck by lightning on the way home and his body was consumed by flame. Barbara was buried by a Christian, Valentinus, and her tomb became the site of miracles. 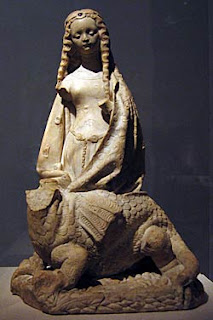 Margaret, known as Margaret of Antioch in the West, and as Saint Marina the Great Martyr in the East, is said to have been martyred in 304, but was declared apocryphal by Pope Gelasius I in 494; however devotion to her revived in the West with the Crusades.

According to the version of the story in Golden Legend, she was a native of Antioch and the daughter of a pagan priest named Aedesius. Her mother having died soon after her birth, Margaret was nursed by a Christian woman. Having embraced Christianity and consecrated her virginity to God, Margaret was disowned by her father, adopted by her nurse, and lived in the country keeping sheep with her foster mother (in what is now Turkey). Olybrius, Governor of the Roman Diocese of the East, asked to marry her, but with the demand that she renounce Christianity. Upon her refusal, she was cruelly tortured, during which various miraculous incidents occurred. One of these involved being swallowed by Satan in the shape of a dragon, from which she escaped alive when the cross she carried irritated the dragon's innards.*