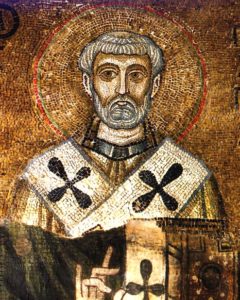 Almighty God, who chose your servant Clement of Rome to recall the church in Corinth to obedience and stability: Grant that your church may be grounded and settled in your truth by the indwelling of the Holy Spirit; reveal to it what is not yet known; fill up what is lacking; confirm what has already been revealed; and keep it blameless in your service; through Jesus Christ our Lord, who lives and reigns with you and the Holy Spirit, one God, for ever and ever. Amen.

Clement is counted as the third bishop of Rome (after the apostles). His predecessors are Linus and Cletus (or Anacletus, or Anencletus), about whom almost nothing is known. They are simply names on a list. Clement is a little more than this, chiefly because he wrote a letter to the Corinthians, which was highly valued by the early church, and has been preserved to the present day. The letter itself does not carry his name, but is merely addressed from the congregation at Rome to the congregation at Corinth. However, a letter from Corinth to Rome a few decades later refers to "the letter we received from your bishop Clement, which we still read regularly." Other early writers are unanimous in attributing the letter to Clement. Perhaps because this letter made his name familiar, he has had an early anonymous sermon (commonly called II Clement) attributed to him, and is a character in some early religious romances (e.g. the Clementine Recognitions). One story about Clement is that he was put to death by being tied to an anchor and thrown into the sea. Accordingly, he is often depicted with an anchor, and many churches in port towns intended to minister chiefly to mariners are named for him. *