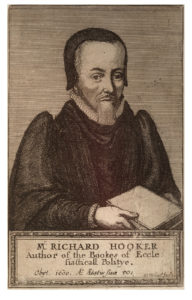 O God of truth and peace, you raised up your servant Richard Hooker in a day of bitter controversy to defend with sound reasoning and great charity the catholic and reformed religion: Grant that we may maintain that middle way, not as a compromise for the sake of peace, but as a comprehension for the sake of truth; through Jesus Christ our Lord, who lives and reigns with you and the Holy Spirit, one God, for ever and ever. Amen.

On any list of great English theologians, the name of Richard Hooker would appear at or near the top. His masterpiece is The Laws of Ecclesiastical Polity. Its philosophical base is Aristotelian, with a strong emphasis on natural law eternally planted by God in creation. On this foundation, all positive laws of Church and State are developed from Scriptural revelation, ancient tradition, reason, and experience.

The occasion of his writing was the demand of English Puritans for a reformation of Church government. Calvin had established in Geneva a system whereby each congregation was ruled by a commission comprising two thirds laymen elected annually by the congregation and one third clergy serving for life. The English Puritans (by arguments more curious than convincing) held that no church not so governed could claim to be Christian.

Hooker replies to this assertion, but in the process he raises and considers fundamental questions about the authority and legitimacy of government (religious and secular), about the nature of law, and about various kinds of law, including the laws of physics as well as the laws of England. In the course of his book he sets forth the Anglican view of the Church, and the Anglican approach to the discovery of religious truth (the so-called via media, or middle road), and explains how this differs from the position of the Puritans, on the one hand, and the adherents of the Pope, on the other. He is very heavy reading, but well worth it. (He says, on the first page of Chapter I: "Those unto whom we shall seem tedious are in no wise injuried by us, seeing that it lies in their own hands to spare themselves the labor they are unwilling to endure." This translates into modern English as: "If you can't take the intellectual heat, get out of the kitchen. If you can't stand a book that makes you think, go read the funny papers.") The effect of the book has been considerable. Hooker greatly influenced John Locke, and (both directly and through Locke), American political philosophy in the late 1700's. Although Hooker is unsparing in his censure of what he believes to be the errors of Rome, his contemporary, Pope Clement VIII (died 1605), said of the book: "It has in it such seeds of eternity that it will abide until the last fire shall consume all learning."

Hooker's best short work is his sermon, "A Learned discourse of Justification." In an earlier sermon, Hooker had expressed the hope of seeing in Heaven many who had been Romanists on earth. A Puritan preacher took him to task for this, saying that since the Romanists did not believe the doctrine of Justification by Faith, they could not be justified. Hooker replied at length in this sermon, in which (1) he sets forth the Doctrine of Justification by Faith, and agrees with his opponent that the official theology of Rome is defective on this point; (2) he defends his assertion that those who do not rightly understand the means that God has provided for our salvation may nonetheless be saved by it, in which connection he says (I quote from memory): "God is no captious sophister, eager to trip us up whenever we say amiss, but a courteous tutor, ready to amend what, in our weakness or our ignorance, we say ill, and to make the most of what we say aright."*

Join us tonight for Evening Prayer and to learn a bit more about Richard Hooker.