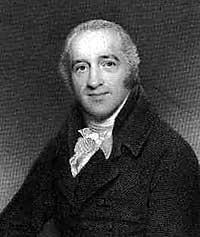 Loving God, whose unerring wisdom and unbounded love order all things: Grant us in all things to see your hand; that, following the example and teaching of your servant Charles Simeon, we may walk with Christ in all simplicity and serve you with a quiet and contented mind; through Jesus Christ our Lord, who lives and reigns with you and the Holy Spirit, one God, for ever and ever. Amen.

Two hundred years ago, students at the English Universities were required to attend church regularly, and to receive the Holy Communion at least once a year. This latter requirement often had bad effects, in that it encouraged hypocrisy and an irreverent reception of the sacrament. Occasionally, however, it had a very good effect, as with the Cambridge student Charles Simeon. He wrote: "On 29 January 1779 I came to college. On 2 February I understood that at division of term I must attend the Lord's Supper. The Provost absolutely required it. Conscience told me that, if I must go, I must repent and turn to God."

By this experience his life was transformed. Upon finishing his college work he was ordained, and shortly appointed chaplain of Holy Trinity, Cambridge, where he remained for 55 years, until shortly before his death on 12 November 1836. His ministry helped to transform the lives of many undergraduates, of whom we may mention two in particular. Henry Martyn (see 19 Oct), inspired by Simeon, abandoned his intention of going into law and instead devoted his life and his considerable talents to preaching the Gospel in India and Persia. William Wilberforce (20 July), also led in part by Simeon's ministry of teaching and example, devoted his life to the abolition of slavery throughout the British Empire. Simeon's enthusiasm and zeal brought him much ridicule and abuse, which he bore uncomplainingly. Though he himself remained in one place, his influence extended through the Anglican world.*