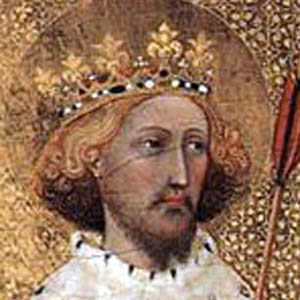 Merciful God, who gave grace and fortitude to Edmund to die nobly for your Name: Bestow on us your servants the shield of faith, with which we can withstand the assaults of our ancient enemy; through Jesus Christ our Redeemer, who lives and reigns with you and the Holy Spirit, one God, now and for ever. Amen.

When the heathen Anglo-Saxons invaded Christian Britain in the 400's, they eventually established seven kingdoms: Essex, Wessex, Sussex (East Saxons, West Saxons, and South Saxons), Mercia, Northumbria, and East Anglia (three kingdoms of the Angles), and the Jute kingdom of Kent. (The borders between these ancient kingdoms are still borders between regions speaking English with different accents today.) Under the influence of missionaries from the Celts and from continental Europe, these peoples became Christian, only to be faced themselves by a wave of heathen invaders.

Edmund was born about 840, became King of East Anglia in about 855, and in 870 faced a horde of marauding Danes, who moved through the countryside, burning churches and slaughtering villages wholesale. On reaching East Anglia, their leaders confronted Edmund and offered him peace on condition that he would rule as their vassal and forbid the practice of the Christian faith. Edmund refused this last condition, fought, and was captured. He was ill-treated and killed. His burial place is the town of Bury St. Edmunds.*

*The Lectionary, James Kiefer, http://www.satucket.com/lectionary/Edmund_EAnglia.htm
Posted by Whit+ at 7:10 AM