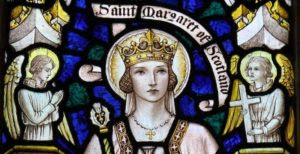 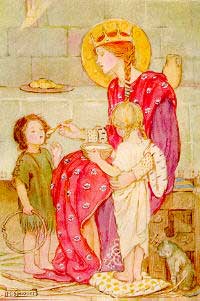 O God, you called your servant Margaret to an earthly throne that she might advance your heavenly kingdom, and gave her zeal for your Church and love for your people: Mercifully grant that we also may be fruitful in good works, and attain to the glorious crown of your saints; through Jesus Christ our Lord, who lives and reigns with you and the Holy Spirit, one God, for ever and ever. Amen.

Margaret (born c. 1045) was the grand-daughter of Edmund Ironside, King of the English, but was probably born in exile in Hungary, and brought to England in 1057. After the Norman Conquest in 1066, she sought refuge in Scotland, where about 1070 she married the King, Malcolm III. She and her husband rebuilt the monastery of Iona and founded the Benedictine Abbey at Dunfermline. Margaret undertook to impose on the Scottish the ecclesiastical customs she had been accustomed to in England, customs that were also prevalent in France and Italy. But Margaret was not concerned only with ceremonial considerations. She encouraged the founding of schools, hospitals, and orphanages. She argued in favor of the practice of receiving the Holy Communion frequently. She was less successful in preventing feuding among Highland Clans, and when her husband was treacherously killed in 1093, she herself died a few days later (of grief, it is said).*

*The Lectionary, James Kiefer, http://www.satucket.com/lectionary/Margaret_Scotland.htm
Posted by Whit+ at 7:45 AM