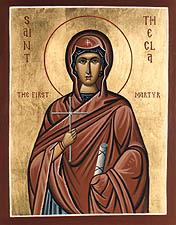 God of liberating power, who called Thecla to proclaim the gospel and did not permit any obstacle or peril to inhibit her: Empower courageous evangelists among us, that men and women everywhere may know the freedom that you offer us in Jesus Christ, who lives and reigns with you and the Holy Spirit, one God, for ever and ever. Amen.

Thecla was a saint of the early Christian Church, and a reported follower of Paul the Apostle. The earliest record of her life comes from the ancient apocryphal Acts of Paul and Thecla.

According to the Acts of Paul and Thecla, Thecla was a young noble virgin who listened to Paul's "discourse on virginity" and became Paul's follower and a Disciple of Paul's teachings and Ministry. Thecla's mother and her fiancé Thamyris became concerned Thecla would follow Paul's demand "one must fear only one God and live in chastity", and punished both Paul and Thecla.

Thecla was miraculously saved from burning at the stake by the onset of a storm and traveled with Paul to Antioch of Pisidia. There a nobleman named Alexander desired Thecla and attempted to take her by force. Thecla fought him off, assaulting him in the process, and was put on trial for assaulting a nobleman. She was sentenced to be eaten by wild beasts, but was again saved by a series of miracles when the female beasts protected her against her male aggressors.

Thecla gained a massive "cult-like" following, and became perhaps the most prominent figure for female empowerment at the time. She listened to Paul's teachings to fear nobody but God, and live in chastity. She demonstrates these teachings on several occasions starting from the first time she heard Paul speak by leaving Thamyris, fighting off Alexander, and surviving several life threatening situations. She traveled to preach the word of God and became an icon encouraging women to also live a life of chastity and follow the word of the Lord.*

*Wikipedia via The Lectionary - http://www.satucket.com/lectionary/Thecla.html