Saint Michael and All Angels

Saint Michael and All Angels 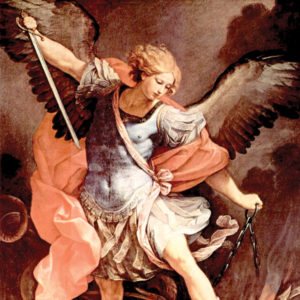 Everlasting God, you have ordained and constituted in a wonderful order the ministries of angels and mortals: Mercifully grant that, as your holy angels always serve and worship you in heaven, so by your appointment they may help and defend us here on earth; through Jesus Christ our Lord, who lives and reigns with you and the Holy Spirit, one God, for ever and ever. Amen.

On the Feast of Michael and all Angels, popularly called Michaelmas, we give thanks for the many ways in which God's loving care watches over us, both directly and indirectly, and we are reminded that the richness and variety of God's creation far exceeds our knowledge of it.

The Holy Scriptures often speak of created intelligences other than humans who worship God in heaven and act as His messengers and agents on earth. We are not told much about them, and it is not clear how much of what we are told is figurative. Jesus speaks of them as rejoicing over penitent sinners (Lk 15:10). Elsewhere, in a statement that has been variously understood (Mt 18:10), He warns against misleading a child, because their angels behold the face of God. (Acts 12:15 may refer to a related idea.)

In the Hebrew Scriptures, it is occasionally reported that someone saw a man who spoke to him with authority, and who he then realized was no mere man, but a messenger of God. Thus we have a belief in super-human rational created beings, either resembling men in appearance or taking human appearance when they are to communicate with us. They are referred to as "messengers of God," or simply as "messengers." The word for a messenger in Hebrew is malach, in Greek, angelos, from which we get our word "angel" [Digression: angelion means "message, news" and euangelion means "good news = goodspell = gospel," from which we get our word "evangelist" used to mean a preacher of the Good News of salvation, and, more narrowly, one of the four Gospel-writers: Matthew, Mark, Luke, and John.]

By the time of Christ, Jewish popular belief included many specifics about angels, with names for many of them. There were thought to be four archangels, named Michael, Gabriel, Raphael, and Uriel. An alternative tradition has seven archangels (see Tobit 12:15 and 1 Enoch 20). Sometimes each archangel is associated with one of the seven planets of the Ptolemaic system (the moon, Mercury, Venus, the Sun, Mars, Jupiter, Saturn). Michael is associated with Saturn and Uriel with the Sun. The other pairings I forget, but I believe that you will find a list in the long narrative poem called "The Golden Legend," by Henry Wadsworth Longfellow. (I believe that a pairing is also offered in the opening chapters of the Proof of the Apostolic Preaching, by Irenaeus of Lyons, but I have not the work at hand.)

Gabriel (the name means "God is my champion") is thought of as the special bearer of messages from God to men. He appears in Daniel 8:16; 9:21 as an explainer of some of Daniel's visions. According to the first chapter of Luke, he announced the forthcoming births of John the Baptist and of our Lord to Zachariah and the Virgin Mary respectively.

Raphael (the name means "God heals") is mentioned in the Apocrypha, in the book of Tobit, where, disguised as a man, he accompanies the young man Tobias on a quest, enables him to accomplish it, and gives him a remedy for the blindness of his aged father.

Uriel (the name means "God is my light" -- compare with "Uriah", which means "the LORD is my light") is mentioned in 4 Esdras.

It is thought by many scholars that the seven lamps of Revelation 4:5 are an image suggested by (among many other things) the idea of seven archangels.

What is the value to us of remembering the Holy Angels? Well, since they appear to excel us in both knowledge and power, they remind us that, even among created things, we humans are not the top of the heap. Since it is the common belief that demons are angels who have chosen to disobey God and to be His enemies rather than His willing servants, they remind us that the higher we are the lower we can fall. The greater our natural gifts and talents, the greater the damage if we turn them to bad ends. The more we have been given, the more will be expected of us. And, in the picture of God sending His angels to help and defend us, we are reminded that apparently God, instead of doing good things directly, often prefers to do them through His willing servants, enabling those who have accepted His love to show their love for one another.*

*The Lectionary, Jame Kiefer - there is much more information here too - http://satucket.com/lectionary/Michael.htm

Join us tonight, Wednesday night, September 29, for Evening Prayer and to learn a little more about Angels and Cherubim in our Bible Project video!