Catherine of Genoa, Mystic and Nurse, 1510 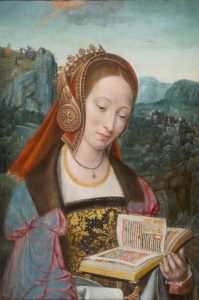 Gracious God, reveal to your church the depths of your love; that, like your servant Catherine of Genoa, we might give ourselves in loving service, knowing that we have been perfectly loved by you; through Jesus Christ our Lord. Amen.

Catherine of Genoa (Caterina Fieschi Adorno, 1447 – 15 September 1510) was an Italian Roman Catholic saint and mystic, admired for her work among the sick and the poor and remembered because of various writings describing both these actions and her mystical experiences. She was a member of the noble Fieschi family, and spent most of her life and her means serving the sick, especially during the plague which ravaged Genoa in 1497 and 1501. She died in that city in 1510.

Her fame outside her native city is connected with the publication in 1551 of the book known in English as the Life and Doctrine of Saint Catherine of Genoa.

Catherine was born in Genoa in 1447, the last of five children. Catherine wished to enter a convent when about 13; however, the nuns to whom her confessor applied on her behalf refused her on account of her youth, and after this Catherine appears to have put the idea aside without any further attempt. After her father’s death in 1463, aged 16, she was married by her parents' wish to a young Genoese nobleman, Giuliano Adorno. The marriage turned out wretchedly:

After ten years of marriage, she was converted by a mystical experience during confession on 22 March 1473. This marked the beginning of her life of close union with God in prayer, without using forms of prayer such as the rosary. She began to receive Communion almost daily, a practice extremely rare for lay people in the Middle Ages, and she underwent remarkable mental and at times almost pathological experiences.

She combined this with unselfish service to the sick in a hospital at Genoa, in which her husband joined her after he, too, had been converted. He later became a Franciscan tertiary, but she joined no religious order. Her husband's spending had ruined them financially. He and Catherine decided to live in a large hospital in Genoa, and to dedicate themselves to works of charity there. She eventually became manager and treasurer of the hospital.

Towards the end of her life a Father Marabotti was appointed to be her spiritual guide. He had been a director of the hospital where her husband died in 1497. To him she explained her states, past and present, and he compiled the Memoirs.

*The Lectionary, via Wikipedia - http://www.satucket.com/lectionary/Catherine_Genoa.html