The Martyrs of New Guinea 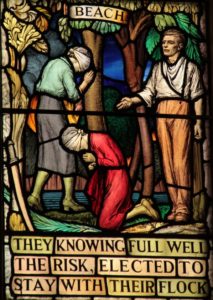 Almighty God, we remember before you this day the blessed martyrs of New Guinea, who, following the example of their Savior, laid down their lives for their friends, and we pray that we who honor their memory may imitate their loyalty and faith; through Jesus Christ our Lord, who lives and reigns with you and the Holy Spirit, one God, for ever and ever. Amen.

New Guinea, the second largest island in the world, is still one of the main frontiers of Christian mission, because of its difficult terrain and the cultural diversity of its peoples, who speak some 500 distinct languages. Christian missionaries first began work there in the 1860s and 1870s, with only limited success. The Anglican mission began in 1891, and the first bishop was consecrated in 1898.

During World War II, the suffering of missionaries and of native people was severe. One historian reckons the total number of martyrs from all Christian denominations during this period at around 330. This feast day, observed in the Diocese of New Guinea and in many dioceses of the Church of Australia, marks the witness of nine Australian missionaries and two Papuan martyrs who died while serving those who needed them.

The missionaries were determined to stay with their flocks during the Japanese invasion, and to continue their work of healing, teaching, and evangelism. Once the invasion occurred, they realized that their presence was a danger to the local people with whom they stayed; any people of European descent were considered enemy combatants and villages harboring them were severely punished. Two of the missionaries, one Australian and one Papuan, were evacuating with the villagers with whom they ministered when their boat was strafed and sunk by sea-planes. The remaining missionaries were captured in the bush. Some were executed by soldiers, others by locals who feared retribution for their presence. One of the Papuan martyrs, Lucian Tapiedi, is among one of the ten

20th century martyrs honored with a statue above the west door of Westminster Abbey in London. While accompanying his Australian companions as a guide, he was separated from the group and killed by a local Orokaiva named Hivijapa. After the war, Hivijapa converted to Christianity, was baptized as Hivijapa Lucian, and built a church at Embi in memory of the evangelist he had slain.*

* A Great Cloud of Witnesses, Copyright © 2016 by The Domestic and Foreign Missionary Society of The Protestant Episcopal Church in the United States of America, https://extranet.generalconvention.org/staff/files/download/19349