Hildegard of Bingen, Mystic and Scholar, 1179 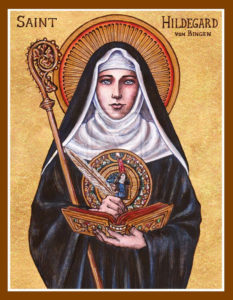 God of all times and seasons: Give us grace that we, after the example of your servant Hildegard, may both know and make known the joy and jubilation of being part of your creation, and show forth your glory in the world; through Jesus Christ our Savior, who lives and reigns with you and the Holy Spirit, one God, for ever and ever. Amen.

Hildegard of Bingen has been called by her admirers "one of the most important figures in the history of the Middle Ages," and "the greatest woman of her time." Her time was the 1100's (she was born in 1098), the century of Eleanor of Aquitaine, of Peter Abelard and Bernard of Clairvaux, of the rise of the great universities and the building of Chartres cathedral. She was the daughter of a knight, and when she was eight years old she went to the Benedictine monastery at Mount St Disibode to be educated. The monastery was in the Celtic tradition, and housed both men and women (in separate quarters). When Hildegard was eighteen, she became a nun. Twenty years later, she was made the head of the female community at the monastery. Within the next four years, she had a series of visions, and devoted the ten years from 1140 to 1150 to writing them down, describing them (this included drawing pictures of what she had seen), and commenting on their interpretation and significance. During this period, Pope Eugenius III sent a commission to inquire into her work. The commission found her teaching orthodox and her insights authentic, and reported so to the Pope, who sent her a letter of approval. (He was probably encouraged to do so by his friend and former teacher, Bernard of Clairvaux.) She wrote back urging the Pope to work harder for reform of the Church. The community of nuns at Mount St. Disibode was growing rapidly, and they did not have adequate room. Hildegard accordingly moved her nuns to a location near Bingen, and founded a monastery for them completely independent of the double monastery they had left. She oversaw its construction, which included such features (not routine in her day) as water pumped in through pipes. The abbot they had left opposed their departure, and the resulting tensions took a long time to heal.

Hildegard travelled throughout southern Germany and into Switzerland and as far as Paris, preaching. Her sermons deeply moved the hearers, and she was asked to provide written copies. In the last year of her life, she was briefly in trouble because she provided Christian burial for a young man who had been excommunicated. Her defense was that he had repented on his deathbed, and received the sacraments. Her convent was subjected to an interdict, but she protested eloquently, and the interdict was revoked. She died on 17 September 1179. *