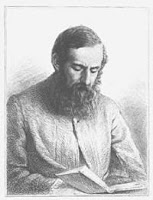 Almighty God, who called your faithful servant John Coleridge Patteson and his companions to witness to the gospel, and by their labors and sufferings raised up a people for your own possession: Pour out your Holy Spirit upon your church in every land, that, by the service and sacrifice of many, your holy Name may be glorified and your kingdom enlarged; through Jesus Christ our Lord, who lives and reigns with you and the Holy Spirit, one God, for ever and ever. Amen.

John Coleridge Patteson was born in London in 1827. He attended Balliol College, Oxford, and graduated in 1849. After a tour of Europe and a study of languages, he became a fellow of Merton College, Oxford, in 1852. In 1855, he heard Bishop George Selwyn of New Zealand (see 11 Apr.) call for volunteers to go to the South Pacific to preach the Gospel. He went there, and founded a school for the education of native Christian workers. He was adept at languages, and learned twenty-three of the languages spoken in the Polynesian and Melanesian Islands of the South Pacific. In 1861 he was consecrated Bishop of Melanesia.

The slave-trade was technically illegal in the South Pacific at that time, but the laws were only laxly enforced and in fact slave-raiding was a flourishing business. Patteson was actively engaged in the effort to stamp it out. However, injured men do not always distinguish friends from foes. After slave-raiders had attacked the island of Nakapu, in the Santa Cruz group, Patteson and several companions visited the area. They were assumed to be connected with the raiders, and Patteson's body was floated back to his ship with five hatchet wounds in the chest, one for each native who had been killed in the earlier raid. The death of Bishop Patteson caused an uproar back in England, and stimulated the government there to take firm measures to stamp out slavery and the slave trade in its Pacific territories. It was also the seed of a strong and vigorous Church in Melanesia today. Patteson and his companions died on 20 September 1871.*