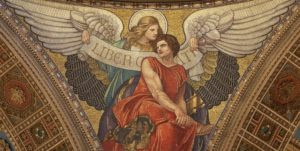 We thank you, heavenly Father, for the witness of your apostle and evangelist Matthew to the Gospel of your Son our Savior; and we pray that, after his example, we may with ready wills and hearts obey the calling of our Lord to follow him; through Jesus Christ our Lord, who lives and reigns with you and the Holy Spirit, one God, now and for ever. Amen.

One day Jesus was walking and saw a tax collector named Matthew sitting at a tax collection post, and said to him, "Follow me." And Matthew stood up and followed Him, and became one of His twelve apostles. Tax collectors in those days were social outcasts. Devout Jews avoided them because they were usually dishonest (the job carried no salary, and they were expected to make their profits by cheating the people from whom they collected taxes). Patriotic and nationalistic Jews hated them because they were agents of the Roman government, the conquerors, and hated them with a double hatred if (like Matthew) they were Jews, because they had gone over to the enemy, had betrayed their own people for money. Thus, throughout the Gospels, we find tax collectors (publicans) mentioned as a standard type of sinful and despised outcast. Matthew brought many of his former associates to meet Jesus, and social outcasts in general were shown that the love of Jesus extended even to them.

The name "Matthew" means "gift of the LORD." Mark and Luke, in the story of his calling, name him "Levi." Perhaps this was his original name, and he received a new name from Jesus when he became a disciple.

Of Matthew's life after Pentecost the Scriptures tell us nothing. Later accounts of his life vary, some reporting that he was martyred, others that he died a natural death. The Christian community since early times has commemorated him as a martyr.*