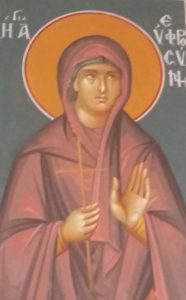 Merciful God, who looks not with outward eyes but discerns the heart of each: we confess that those whom we love the most are often strangers to us. Give to all parents and children, we pray, the grace to see one another as they truly are and as you have called them to be. All this we ask in the name of Jesus Christ, our only mediator and advocate. Amen.

Saint Euphrosyne of Alexandria (fl. 5th century CE) was a female saint who adopted male attire and lived at a local monastery as an ascetic.

Euphrosyne was the beloved only daughter of Paphnutius, a rich man of Alexandria, miraculously born in her parents' old age in answer to a monk's prayer. Her loving father desired to marry her to a wealthy youth.

But having already consecrated her life to God and under pressure to break her vow, she dressed as a man and assumed the identity of "Smaragdus" ("emerald"). She then escaped to a nearby men's monastery, where she made rapid strides toward a perfected ascetic life. She was under the guidance of the abbot, who also happened to be the same monk who had prayed for her birth.

Years later, when Paphnutius appealed to the abbot for comfort in his bereavement, the abbot committed him to the care of Euphrosyne, still under the guise of Smaragdus. Paphnutius received from his own daughter, whom he had failed to recognize, helpful advice and comforting exhortation. Not until she was dying did Euphrosyne reveal herself to him as his lost daughter. After burying her, Paphnutius gave up all his worldly goods, and became a monk in the same monastery. There, he used his daughter's old cell until his own death ten years after.*

*Wikipedia via The Lectionary, http://satucket.com/lectionary/euphrosyne.html