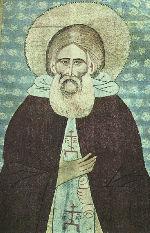 O God, whose blessed Son became poor that we, through his poverty, might be rich: Deliver us from an inordinate love of this world, that we, inspired by the devotion of your servant Sergius, may serve you with singleness of heart and attain to the riches of the age to come; through Jesus Christ our Lord, who lives and reigns with you and the Holy Spirit, one God, for ever and ever. Amen.

To the people of Russia, Sergius is a national hero and an example of Russian spiritual life at its best.

Sergius was born around 1314, the son of a farmer. When he was twenty, he and his brother began to live as hermits in a forest near Moscow. Others joined them in what became the Monastery of the Holy Trinity, a center for the renewal of Russian Christianity. Pilgrims came from all Russia to worship and to receive spiritual instruction, advice, and encouragement. The Russians were at the time largely subservient to the neighboring (non-Christian) Tatar (or Tartar) people. Sergius rallied the people behind Prince Dimitri Donskoi, who defeated the Tatars in 1380 and established an independent Russia.

Sergius was a gentle man, of winning personality. Stories told of him resemble those of Francis of Assisi, including some that show that animals tended to trust him. He had the ability to inspire in men an intense awareness of the love of God, and a readiness to respond in love and obedience. He remained close to his peasant roots. One contemporary said of him, "He has about him the smell of fir forests." To this day, the effect of his personality on Russian devotion remains considerable.

St. Sergius died at an extremely advanced age in 1392, amidst the lamentations of his contemporaries.*