Paula and Eustochium of Rome, Monastics and Scholars, 404 and c. 419 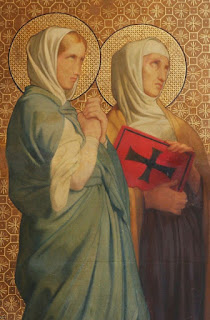 Compel us, O God, to attend diligently to your Word, as did your faithful servants Paula and Eustochium; that, by the inspiration of the Holy Spirit, we may find it profitable for doctrine, for reproof, for correction, and for instruction in righteousness; and that thereby we may be made wise unto salvation through faith in Christ Jesus our Lord. Amen.

Paula of Rome (AD 347–404) was an ancient Roman saint and early Desert Mother. A member of one of the richest senatorial families, Paula was the daughter of Blesilla and Rogatus. In her mid teens, Paula was married to the nobleman Toxotius, with whom she had four daughters and a boy.

At the age of 32, Paula was widowed. She continued to dedicate herself to her family, but became more interested in religion as time went on. Through the influence of Saint Marcella and her group, Paula became an enthusiastic member of this semi-monastic group of women. In 382, she met Saint Jerome, who had come to Rome.

A year after the death of her husband, Paula pursued a pilgrimage to tour all of the holy sights traveling with large entourages of both men and women including her daughter Eustochium and Jerome himself. In conclusion to her journey, Paula decided to remain in Bethlehem to develop a monastery and spiritual retreat with Jerome. Once settling in Bethlehem, Paula and Jerome built a double monastery including one for Paula and her nuns and another for Jerome and his monks. The addition of a roadside hostel was also constructed to serve as an economic source to fund the monasteries. Once completed, the monastery segregated each gender from one another during manual labor and meals, but practiced prayer in the same locale. During its functioning, Jerome and Paula's retreat attracted large crowds of visitors both from Christian backgrounds and general travelers from a variety of regions including Ethiopia, Persia, and India. Along with this, aristocratic refugees were also drawn to the locale due to Jerome's extensive network of followers.

Paula is noted as maintaining her ascetic devotion through intensive studies of the Old and New Testaments, often under the guidance of Jerome. With this, she also practiced a strict fasting regimen, abstinence, and pursued a destitute lifestyle “to preserve a singular attachment to God” as stated by Jerome. While practicing this life of isolation, Paula still continued to interact with local clergy and bishops and maintained devout attention to teaching the nuns under her sovereignty. Paula, through these practices, became a recognized figure in the Christian community. Upon her death on January 26 404 AD, her funeral was noted as having a significant portion of the Palestine population arrive in her honor. A year after her passing, Paula obtained the title of Saint recognized by the Latin Church.

Eustochium spoke Latin and Classical Greek with equal ease and was able to read the scriptures in the Hebrew text. Many of Jerome's Biblical commentaries owe their existence to her influence and to her he dedicated his commentaries on the prophets Isaiah and Ezekiel.

The letters which Jerome wrote for her instruction and spiritual advancement are, according to his own testimony, very numerous. After the death of Paula in 404, Eustochium assumed the direction of the nunneries. Her task was a difficult one on account of the impoverished condition of the temporal affairs which was brought about by the lavish almsgiving of Paula.

* Wikipedia, via The Lectionary - http://satucket.com/lectionary/paula&eustochium.html 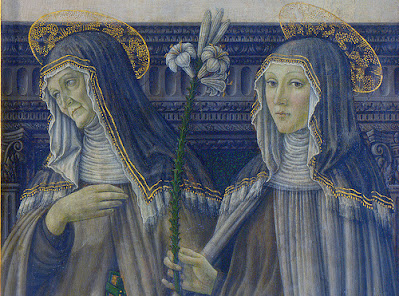