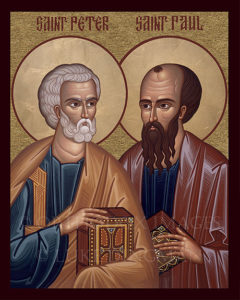 Almighty God, whose blessed apostles Peter and Paul glorified you by their martyrdom: Grant that your Church, instructed by their teaching and example, and knit together in unity by your Spirit, may ever stand firm upon the one foundation, which is Jesus Christ our Lord; who lives and reigns with you, in the unity of the Holy Spirit, one God, now and for ever. Amen.

The Confession of Peter ("Thou art the Christ, the Son of the Living God") is commemorated on 18 January, and the Conversion of Paul (on the approach to Damascus) a week later on 25 January. On 29 June we commemorate the martyrdoms of both apostles. The date is the anniversary of a day around 258, under the Valerian persecution, when what were believed to be the remains of the two apostles were both moved temporarily to prevent them from falling into the hands of the persecutors. The Scriptures do not record the deaths of Peter or Paul, or indeed any of the Apostles except for James the son of Zebedee (Acts 12:2), but they are clearly anticipated (see the readings below), and from an early date it has been said that they were martyred at Rome at the command of the Emperor Nero, and buried there. As a Roman citizen, Paul would probably have been beheaded with a sword. It is said of Peter that he was crucified head downward. The present Church of St Peter in Rome replaces earlier churches built on the same site going back to the time of the Emperor Constantine, in whose reign a church was built there on what was believed to be the burial site of Peter. Excavations under the church suggest that the belief is older than Constantine. St. Augustine writes (in Sermon 295): “Both apostles share the same feast day, for these two were one; and even though they suffered on different days, they were as one. Peter went first, and Paul followed. And so we celebrate this day made holy for us by the apostles' blood. Let us embrace what they believed, their life, their labors, their sufferings, their preaching, and their confession of faith.”*