Basil of Caesarea, Bishop and Theologian, 379 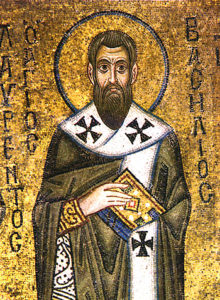 Almighty God, who has revealed to your church your eternal Being of glorious majesty and perfect love as one God in Trinity of Persons: Give us grace that, like your bishop Basil of Caesarea, we may continue steadfastly in the confession of this faith and remain constant in our worship of you, Father, Son, and Holy Spirit; ever one God, for ever and ever. Amen.

Basil died on 1 January 379. He is accordingly commemorated on that day in the East. The traditional Western date is 14 June, the anniversary of his consecration. The Roman usage has adopted 2 January. Basil was born in Caesarea of Cappadocia, a province in what is now central Turkey. He was born in 329, after the persecution of Christians had ceased, but with parents who could remember the persecutions and had lived through them. The influence and example of his sister, Macrina, led him to seek the monastic life. Basil served as Bishop and Theologian, and defended of the faith in the time between the First Ecumenical Council at Nicea, 325, and the Second at Constantinople, 381 - years in which it was uncertain whether the Church would stand by the declaration made at Nicea that the Logos (the "Word" -- see John 1:1) was fully God, equally with the Father, or seek a more flexible formula in the hope of reconciliation with the Arians.  Basil is counted with his brother, Gregory of Nyssa, and his friend, Gregory of Nazianzus, as one of the three Cappadocians or early Greek Church leaders.*