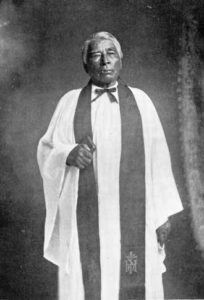 Almighty God, who led your pilgrim people of old by fire and cloud: Grant that the ministers of your church, following the example of your servant Enmegahbowh, may lead your people with fiery zeal and gentle humility; through Jesus Christ, who lives and reigns with you in the unity of the Holy Spirit, one God, now and for ever. Amen.

Enmegahbowh (c. 1820 – June 12, 1902; from Enami'egaabaw, meaning "He that prays [for his people while] standing"; also known as John Johnson) was the first Native American to be ordained a priest in the Episcopal Church. Born around 1820, Enmegahbowh (pronounced En-meh-GAH-boe), was the only child of the chief of an Ojibwe Band on Rice Lake near Peterborough, Canada. He was raised in a Christian village near Petersburg which was affiliated with the Methodists. On July 4, 1841 Enmegahbowh married Biwabikogeshigequay (a/k/a Iron Sky Woman and baptized Charlotte), niece of Hole-in-the-Day. He met the Rev. Ezekiel Gilbert Gear, chaplain at Fort Snelling at the confluence of the Mississippi and Minnesota Rivers, and became an Episcopalian. Gear eventually introduced Enmegahbowh to the Rev. James Lloyd Breck, a missionary who had arrived in Minnesota in 1851, and who baptised Enmegahbowh. Bishop Jackson Kemper ordained the youth a deacon in 1859, and Enmegahbowh went to Crow Wing, Minnesota to assist in founding St. Columba Mission. During the Dakota War of 1862, which began as treaty payments were due for distribution to the starving Sioux at Fort Ridgely, the Gull Lake Band of Mississippi Chippewa rose to attack near-by Fort Ripley. Enmegahbowh prevented other Ojibwa bands from joining the Gull Lake Band, for which the rebels imprisoned him. Enmegahbowh escaped and traveled thirty miles at night to warn Fort Ripley. This discouraged the Gull Lake Band from attacking the fort. In 1867 Bishop Whipple ordained Enmegahbowh a priest. In 1869 he encouraged Chief White Cloud's mission to establish peace between the Ojibwe and the Sioux in 1869. Enmegahbowh died at the White Earth Indian Reservation in northern Minnesota on June 12, 1902 at the age of 95, and is buried in St. Columba's churchyard.*

What a great story!