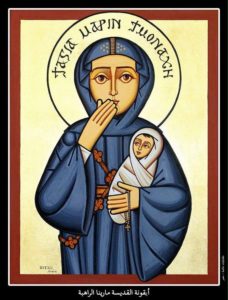 Give us grace, Lord God, to refrain from judgments about the sins of others; that, like your servant Marina the Monk, we may hold fast to the path of discipleship in the midst of unjust judgments; through Jesus Christ our Lord who lives and reigns with you and the Holy Spirit, one God, for ever and ever. Amen.

Marina, distinguished as Marina the Monk and also known as Pelagia and Mary of Alexandria, was a Christian saint of Byzantine, the area was variously know as Syria & Lebanon. Marina, born Mariam, was the offspring of wealthy Christian parents and is often considered to be a transgender man. Marina's mother died when the saint was very young, and thus Marina was raised in devout Christian life by his father Eugenius. As Marina’s age of marriage drew near, Marina’s father wished to retire to a monastery after he had found his child a husband. When Marina learned of his father's plan, he asked why her father intended to save his own soul "and destroy mine." When asked by her father, "What shall I do with you? You are a woman", Marina answered that he would renounce women's clothing and live as a monk. He then immediately shaved the hair from his own head and changed his clothes to male ones. His father, seeing his child’s strong determination, gave all his possessions to the poor and traveled with Marina to the Kadisha Valley to live in monastic community life, sharing a cell with him under the name Marinos. After ten years Marina’s father died, leaving her alone. Marina continued to conceal the fact that he was born a woman. Later, a pregnant woman told her father that Marinos (Marina) was to blame. On hearing the story, the abbot called for Marina and reprimanded him severely. When Marina realized what was happening he fell to his knees and wept, confessing his sinfulness (without explicitly stating how he had sinned) and asking forgiveness. The fact that there was no attempt to deny the fault made the abbot so furious that he told Marina to leave the monastery. He left at once and remained outside the gates as a beggar. When the pregnant woman gave birth, Marina raised the child. After ten years the monks convinced the abbot to allow Marina to return to the monastery. At the age of forty, Marina became ill and died. While cleaning the body, the monks discovered that he was in fact, born a woman. This made them very distressed. During the funeral prayers, one of the monks, who was blind in one eye, received full sight again after he touched the body.*

*Wikipedia (via The Lectionary), https://en.wikipedia.org/wiki/Marina_the_Monk