Blandina and Her Companions

Blandina and Her Companions, the Martyrs of Lyons, 177 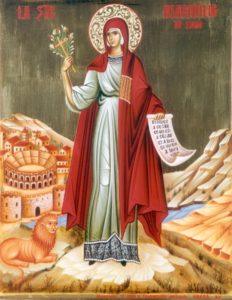 Almighty God, who gave such courage and endurance to Blandina and her companions that by their deaths many hearts were turned to you; Grant that we, in accordance with their example, may also gladly endure all that is required of us as we witness to you in our own day; through Jesus Christ our Lord, who lives and reigns with you and the Holy Spirit, one God, now and for ever. Amen.

In the text of Apologeticus attributed to Tertullian - a work that defends Christianity, and that demands legal toleration and that Christians be treated as all other sects of the Roman Empire -  is this sentence "Plures efficimur, quitiens metimur a vobis: semen est sanguis Christianorum." which has been liberally and apocryphally translated as "the blood of the martyrs is the seed of the Church." Alexander Souter translated this phrase as "We spring up in greater numbers the more we are mown down by you: the blood of the Christians is the seed of a new life," but even this takes liberties with the original text. "We multiply when you reap us. The blood of Christians is seed," is perhaps a more faithful, if less poetic, rendering.1

At Lyons and Vienne, in Gaul, there were missionary centers which had drawn many Christians from Asia and Greece. Persecution began in 177. At first, Christians were excluded from the public baths, the market place, and from social and public life. They were subject to attack when they appeared in public, and many Christian homes were vandalized. At this point the government became involved, and began to take Christians into custody for questioning. Some slaves from Christian households were tortured to obtain confessions, and were induced to say that Christians practiced cannibalism and incest. These charges were used to arouse the whole city against the Christians, particularly against Pothinus, the aged bishop of Lyons; Sanctus, a deacon; Attalus; Maturus, a recent convert; and Blandina, a slave. Pothinus was beaten and then released, to die of his wounds a few days later. Sanctus was tormented with red-hot irons. Blandina, tortured all day long, would say nothing except, "I am a Christian, and nothing vile is done among us." Finally, the survivors were put to death in the public arena.2

Join us tonight for Evening Prayer and our Bible Project Class to find out more about Blandina and Her Companions, and to learn something new about the Bible.