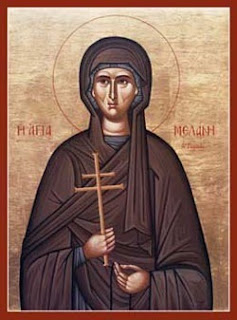 Most High and Merciful God, who called your servant Melania to forsake earthly comforts in order to devote herself to studying the scriptures and to welcoming the poor: Instruct us in the ways of poverty and the grace of hospitality, that we might comfort those who have no place to rest and teach the way of your love; through Jesus Christ our Lord. Amen.

Melania the Elder, (born in Spain, ca. 350–died in Jerusalem before 410 or in c. 417) was a Desert Mother who was an influential figure in the Christian ascetic movement (the Desert Fathers and Mothers) that sprang up in the generation after the Emperor Constantine made Christianity a legal religion of the Roman Empire.*