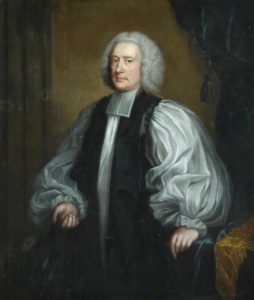 O God, who raises up scholars for your church in every generation; we praise you for the wisdom and insight granted to your bishop and theologian Joseph Butler, and pray that your church may never be destitute of such gifts; through Jesus Christ our Lord, who with you and the Holy Spirit lives and reigns, one God, for ever and ever. Amen.

Joseph Butler was born in 1692 and ordained in 1718. In 1726 he published Fifteen Sermons, preached at the Rolls Chapel in London, which chiefly dealt with human nature and its implications for ethics and practical Christian life. He maintained that it is normal for a man to have an instinct of self-interest, which leads him to seek his own good, and equally normal for him to have an instinct of benevolence, which leads him to seek the good of others individually and generally, and that the two aims do not in fact conflict. Butler served as parish priest in several parishes, and in 1736 was appointed chaplain to Queen Caroline, wife of King George II. In the same year he published his masterpiece, The Analogy of Religion, Natural and Revealed, to the Constitution and Course of Nature (often cited simply as "Butler's Analogy"), a work chiefly directed against Deism. Appended to the main work was a treatise, Of the Nature of Virtue, which establishes him as one of the foremost British writers on ethics, or moral philosophy. When the Queen died in 1737, Butler was made Bishop of Bristol. (In England at that time, bishoprics and parish churches were supported each by a separate source of income that had been established for it perhaps centuries earlier, and in consequence the funding was very unequal. Bristol, being the lowest paid of all bishoprics, was where a new bishop usually started. Later, he might be promoted to another diocese. The Reform movement of the 1830's and its aftermath have remedied this situation.) However, George II had been impressed with him earlier, and in 1746 he was called back to court and the next year offered the post of Archbishop of Canterbury. He refused the post, but in 1750 he became Bishop of Durham (in the north of England, near the Scottish border, and well known even then as having a tradition of bishops whose speeches and writings attract public attention). He died there on 16 June 1752.*

Join us tonight for Evening Prayer and our Bible Project Class to find out more about Joseph Butler, and to learn something new about the Bible.