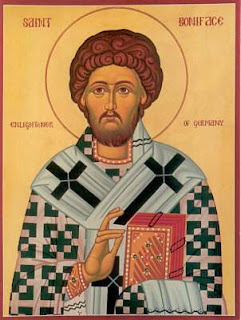 Pour out your Holy Spirit, O God, upon your church in every land, that like your servant Boniface we might proclaim the Gospel to all nations, that your kingdom might be enlarged and that your holy Name might be glorified in all the world; through Jesus Christ our Lord, who lives and reigns with you and the same Spirit, one God, for ever and ever. Amen.

“Wynfrith, nicknamed Boniface ("good deeds"), was born around 680 near Crediton in Devonshire, England. When he was five, he listened to some monks who were staying at his father's house. They had returned from a mission to the pagans on the continent, and Boniface was so impressed by them that he resolved to follow their example. Although his father had intended him for a secular career, he gave way to his son's entreaties and sent him at the age of seven to a monastery school. He eventually became director of the school at Nursling, in Winchester, where he wrote the first Latin grammar in England, and gave lectures that were widely copied and circulated. The historian Christopher Dawson estimates that he has had a greater influence on the history of Europe than any other Englishman.” 1

1 The Lectionary, by James Kiefer, http://www.satucket.com/lectionary/Boniface.htm