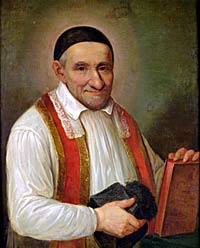 Most Gracious God, who has bidden us to act justly, love mercy, and walk humbly before you; Teach us, like your servants Vincent de Paul and Louise de Marillac, to see and to serve Christ by feeding the hungry, welcoming the stranger, clothing the naked, and caring for the sick; that we may know him to be the giver of all good things, through the same Jesus Christ our Lord. Amen.

Vincent de Paul was born in Gascony in about 1580, of peasant stock. He was an intelligent lad, and his father sent him off to be educated. He was ordained at twenty, and at first was interested chiefly in a successful career. But when he was thirty, he accepted a post as chaplain and tutor in the household of Philip de Gondi, Count of Joigny. This brought him into contact with the peasants on the Gondi estate, and he became concerned for their needs, physical and spiritual. A peasant who believed himself to be dying confessed to him that his previous confessions for many years had been dishonest. Vincent began to preach in the local church on confession, repentance, forgiveness, and the love of God. His sermons drew such crowds of penitents that he had to call in a group of other priests to assist him. He took on the pastorship of a neighboring church attended by a more fashionable and aristocratic crowd, and there he likewise drew many of his listeners to repentance and amendment of life. Returning to Paris, he worked among the prisoners destined for the galleys who were being held at the Conciergerie.

In 1625 he established the Congregation of the Mission (now known as the Vincentians, or the Lazarists), a community of priests who undertook to renounce all ecclesiastical advancement and devote themselves to work in the small towns and villages of France. In an age not noted for "interdenominational courtesy," he instructed his missioners that Protestants were to be treated as brothers, with respect and love, without patronage or condescension or contentiousness. Wealthy men and women came to him, expressing a wish to amend their lives, and he organized them into a Confraternity of Charity, and set them to work caring for the poor and sick in hospitals and in home visits. In 1633 the Archbishop or Paris gave him the Priory of St Lazare as a headquarters. There he offered retreats six times a year for those who were preparing for the ministry. These lasted two weeks each, and each involved about eighty students. He then began to offer similar retreats for laypersons of all classes and widely varying backgrounds. He said (identifying Lazarus of the Parable with Lazarus of Bethany):

This house was formerly used as a retreat for lepers, and not One of them was cured. Now it is used to receive sinners, who are sick men covered with spiritual leprosy, but are cured by the grace of God. Nay, rather, they are dead men brought back to life. What a joy it is to think that the house of St Lazare is a house of resurrection! Lazarus, after he had been four days in the tomb, came out alive, and our Lord who raised him up still gives the same grace to many who, after staying here some days as in the grave of Lazarus, come out with a new life.

Out of his Confraternity of Charity there arose an order of nuns called the Daughters (or Sisters) of Charity, devoted to nursing those who were sick and poor. He said of them, "Their convent is the sick-room, their chapel the parish church, their cloister the streets of the city." Many babies were abandoned in Paris every year, and when Vincent saw some of them, he established an orphanage for them, and thereafter often wandered through the slums, looking in corners for abandoned babies, which he carried back to the orphanage.

He complained to the King that ecclesiastical posts were distributed simply as political favors, and that the spiritual qualifications of the appointees were simply ignored. The King responded by creating a Council of Conscience to remedy the matter, with Vincent at the head. On one occasion, a noblewoman of the court, furious with Vincent because he refused to nominate her son for a position as bishop, threw a stool at him. He left the room with a stream of blood pouring from his forehead, and said to a companion who was waiting for him, "Is it not wonderful how strong a mother's love for her son can be?" He died 27 September 1660.*