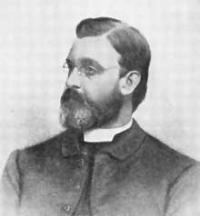 Almighty and everlasting God, who led your servant James De Koven to honor your presence at the altar, and constantly to point to Christ: Grant that all ministers and stewards of your mysteries may impart to your faithful people the knowledge of your presence and the truth of your grace; through the same Jesus Christ our Lord, who lives and reigns with you and the Holy Spirit, one God, for ever and ever. Amen.

James de Koven was born in Connecticut in 1831, ordained to the priesthood in 1855, and promptly became a professor of Church history at Nashotah House, a seminary of the Episcopal Church in Wisconsin. In 1859 he became Warden of Racine College, an Episcopal college in Racine, Wisconsin. Nashotah House was from its inception dedicated to an increased emphasis on the real presence of Christ in the Sacrament of the Lord's Supper, and on the use of ritual practices that recognized and honored that presence. This met opposition from other Christians who were suspicious (1) of anything that suggested Roman Catholicism, (2) of anything that seemed fancy and pretentious, as opposed to the plain, blunt, simplicity that was considered to be an American virtue as well as a virtue of the New Testament Church, and (3) of anything that varied from the practices they had become used to as children.

In the General Conventions of 1871 and 1874, de Koven became the chief spokesman for the "ritualists," defending the use of candles, incense, bowing and kneeling, and the like. He reminded his hearers of the numerous assertions by prominent Anglican theologians from the Reformation on down who had taught, and the ecclesiastical courts which when the question came up had ruled, that it is Anglican belief, shared not only with Romans but with Lutherans and Eastern Orthodox, that the presence of the Body and Blood of Christ in the Sacrament is a real and objective presence. However, he was eloquent and firm in saying: "The gestures and practices by which we recognize the presence of Christ do not matter. Only Christ matters."

In 1874 he was elected Bishop of Wisconsin, and in 1875 Bishop of Illinois, but because he was "controversial" he failed both times to have his election ratified by a majority of Bishops and a majority of Standing Committees of Dioceses, as required by canon law.