Gregory the Great, Bishop and Theologian, 604 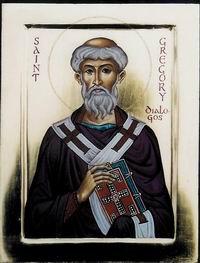 Almighty and merciful God, you raised up Gregory of Rome to be a servant of the servants of God, and inspired him to send missionaries to preach the Gospel to the English people: Preserve in your church the catholic and apostolic faith they taught, that your people, being fruitful in every good work, may receive the crown of glory that never fades away; through Jesus Christ our Lord, who lives and reigns with you and the Holy Spirit, one God, for ever and ever. Amen.

Only two Popes, Leo I and Gregory I, have been given the popular title of “the Great.” Both served in the difficult times of the barbarian invasions of Italy. Gregory also knew the horrors of “plague, pestilence, and famine.” He was born of a patrician family about 540, and became Prefect of Rome in 573. Shortly thereafter he retired to a monastic life in a community which he founded in his ancestral home on the Coelian Hill. Pope Pelagius II made him Ambassador to Constantinople in 579, where he learned much about the larger affairs of the Church. Not long after his return home, Pope Pelagius died of the plague, and in 590, Gregory was elected as his successor.

Gregory’s pontificate was one of strenuous activity. He organized the defense of Rome against the attacks of the Lombards and fed its populace from papal granaries in Sicily. In this, as in other matters, he administered “the patrimony of St. Peter” with energy and efficiency. His ordering of the Church’s liturgy and chant has molded the spirituality of the Western Church until the present day. Though unoriginal in theology, his writings provided succeeding generations with basic texts, especially the Pastoral Care, a classic on the work of the ministry.

In the midst of all his cares and duties, Gregory prepared and fostered the evangelizing mission to the Anglo-Saxons under Augustine and other monks from his own monastery. The Venerable Bede justly called Gregory “The Apostle of the English.”

Gregory died on March 12, 604, and was buried in St. Peter’s Basilica. His life was a true witness to the title he assumed for his office: “Servant of the servants of God.” *

* A Great Cloud of Witnesses, A Calendar of Commemorations, Copyright © 2016 by The Domestic and Foreign Missionary Society of The Protestant Episcopal Church in the United States of America