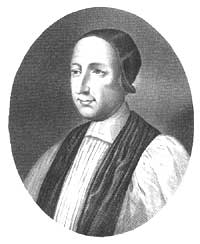 Almighty God, you gave your servant Thomas Ken grace and courage to bear witness to the truth before rulers and kings: Give us strength also that, following his example, we may constantly defend what is right, boldly reprove what is evil, and patiently suffer for the truth’s sake; through Jesus Christ our Lord, who lives and reigns with you and the Holy Spirit, one God, for ever and ever. Amen.

Thomas Ken was born at Berkhampsted, Hertfordshire, England, in July, in 1637. Throughout his life he was both rewarded and punished for his integrity. His close relationship with the royal family began when he became chaplain to Princess Mary of Orange at The Hague. Ken was appalled at the Prince of Orange’s treatment of his wife, and rebuked him publicly.

In 1683, Ken returned to England and became chaplain to Charles II. His integrity stirred him to rebuke Charles for lax behavior. When Ken was notified that the King’s mistress, the actress Nell Gwynne, was to be lodged at his house, he refused, saying, “a woman of ill-repute ought not to be endured in the house of a clergyman, and especially the King’s chaplain.” The King took no offense, but in the next year made Ken the Bishop of Bath and Wells, declaring that none should have the position except “the little … fellow that refused his lodging to poor Nelly.”

In 1688, when Charles’ successor, James II, tried to undermine the authority of the Church of England and restore Roman Catholicsm, Ken was one of seven bishops who refused to read the King’s Declaration of Indulgence, which offered toleration to Protestant nonconformists and to Roman Catholics. The seven bishops were sent to the Tower, but were acquitted in the courts, and became popular heroes. After the Revolution of 1688, however, Ken’s conscience did not permit him to swear allegiance to William of Orange, who became King William III. As a Non-Juror, Ken was deprived of his see.

Ken’s conscience would not let him rest and his disagreement with others of the “Non-Juring” party over various matters troubled him for the rest of his life. He deplored the Non-Juror schism, and after the accession of Queen Anne in 1702, he made his peace with the Church of England, encouraging his fellow Non-Jurors to return to their parish churches in 1710. Ken announced his intention to do the same, but died on March 19, 1711, before doing so.

A man of deep piety, Ken was the author of several religious works, which were immensely popular in the eighteenth century. He is best known as a writer of hymns, particularly the well-known evening hymn, “All praise to thee, my God, this night” (The Hymnal 1982, #43), which concludes with his doxology, “Praise God from whom all blessings flow.” One of the most compelling products of his piety and his pen is the prayer, “Our God, amidst the deplorable division of your church, let us never widen its breaches, but give us universal charity to all who are called by your name. Deliver us from the sins and errors, the schisms and heresies of the age. Give us grace daily to pray for the peace of your church, and earnestly to seek it and to excite all we can to praise and love you; through Jesus Christ, our one Savior and Redeemer.” *

* A Great Cloud of Witnesses A Calendar of Commemorations, Copyright © 2016 by The Domestic and Foreign Missionary Society of The Protestant Episcopal Church in the United States of America