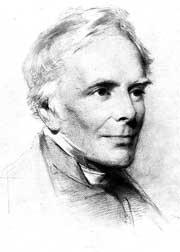 Grant, O God, that in all time of our testing we may know your presence and obey your will, that, following the example of your servant John Keble, we may accomplish with integrity and courage what you give us to do and endure what you give us to bear; through Jesus Christ our Lord, who lives and reigns with you and the Holy Spirit, one God, for ever and ever. Amen.

John Keble, born 1792, ordained Priest in 1816, tutor at Oxford from 1818 to 1823, published in 1827 a book of poems called The Christian Year, containing poems for the Sundays and Feast Days of the Church Year. The book sold many copies, and was highly effective in spreading Keble's devotional and theological views. His style was more popular then than now, but some of his poems are still in use as hymns, such the three beginning:

New every morning is the love
Our waking and uprising prove,
Through sleep and darkness safely brought,
Restored to life and power and thought.
Sun of my soul, thou Savior dear,
It is not night if thou be near.
Oh, may no earthborn cloud arise
To hide thee from thy servant's eyes.
Blest are the pure in heart,
for they shall see our God.
The secret of the Lord is theirs;
Their soul is Christ's abode.

He was Professor of Poetry at Oxford from 1831 to 1841, and from 1836 until his death thirty years later he was priest of a small parish in the village of Hursley near Winchester.

On 14 July 1833, he preached the Assize Sermon at Oxford. (This sermon marks the opening of a term of the civil and criminal courts, and is officially addressed to the judges and officers of the court, exhorting them to deal justly.) His sermon was called "National Apostasy," and denounced the Nation for turning away from God, and for regarding the Church as a mere institution of society, rather than as the prophetic voice of God, commissioned by Him to warn and instruct the people. The sermon was a nationwide sensation, and is considered to be the beginning of the religious revival known as the Tractarian Movement (so called because of a series of 90 Tracts, or pamphlets addressed to the public, which largely influenced the course of the movement) or as the Oxford Movement (not to be confused with the Oxford Group -- led by Frank Buchman and also called Moral Re-Armament, or MRA -- which came a century later and was quite different). Because the Tractarians emphasized the importance of the ministry and of the sacraments as God-given ordinances, they were suspected by their opponents of Roman Catholic tendencies, and the suspicion was reinforced when some of their leaders (John Henry Newman being the most conspicuous) did in fact become Roman Catholics. But the movement survived, and has profoundly influenced the religious thinking, practice, and worship of large portions of Christendom. Their insistence, for example, that it was the normal practice for all Christians to receive the sacrament of Holy Communion every Sunday has influenced many Christians who would never call themselves Anglicans, let alone Tractarians. Keble translated the works of Irenaeus of Lyons (28 June 202), and produced an edition of the works of Richard Hooker, a distinguished Anglican theologian (3 Nov 1600). He also wrote more books of poems, and numerous hymn lyrics. Three years after his death, his friends and admirers established Keble College at Oxford.*