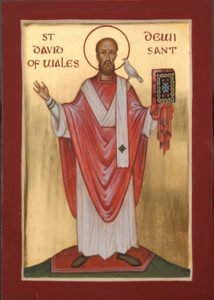 Almighty God, who called your servant David to be a faithful and wise steward of your mysteries for the people of Wales: Mercifully grant that, following his purity of life and zeal for the Gospel of Christ, we may, with him, praise you both here on earth and also in your everlasting kingdom; through Jesus Christ our Lord, who lives and reigns with you and the Holy Spirit, one God, for ever and ever. Amen.

When the pagan Anglo-Saxons invaded Britain in the fifth and sixth centuries, many British Christians sought refuge in the hill country of Wales. There they developed a style of Christian life devoted to learning, asceticism, and missionary fervor. Since there were no cities, the centers of culture were the monasteries, and most abbots were bishops as well. Dewi (David in English) was the founder, abbot, and bishop of the monastery of Mynyw (Menevia in English) in Pembrokeshire. He was responsible for much of the spread of Christianity in Wales, and his monastery was sought out by many scholars from Ireland and elsewhere. He is commonly accounted the apostle of Wales, as Patrick is of Ireland. His tomb is in St. David's cathedral, on the site of ancient Mynyw, now called Ty-Dewi (House of David).

Statue of St. David, at St. David's CathedralThe ancient custom in Wales, as throughout Celtic Christendom, was to have bishops who were abbots of monasteries, and who had no clear territorial jurisdiction, simply traveling about as they were needed. Eventually, however, the bishops of Bangor, Llandaff, St. Asaph, and St. Davids became the heads of four territorial dioceses, to which the diocese of Monmouth and the diocese of Swansea and Brecon have been added in this century.

For many centuries the Church in Wales had closer ties with the Celtic Churches in Scotland, Ireland, and Brittany than with the Church in Anglo-Saxon England. However, after the Norman conquest of Britain (1066 and after), the Anglo-Norman Kings began to contemplate the conquest of Wales. William the Conqueror began with the subjugation of South Wales as far as Carmathen, but the Welsh uplands remained independent far longer, and the conquest was not complete until about 1300, under Edward I. But eventually all of Wales came under English control, and the Church in Wales was placed under the jurisdiction of Canterbury, and thus became identified in the minds of many with the English supremacy. In 1920 the Church in Wales (Eglwys yng Nghymru) became independent of outside jurisdiction (though still in communion with other Anglican Churches, in England and elsewhere) and clear of all ties with the government. It is bilingual and active in the preservation of the Welsh language and culture.